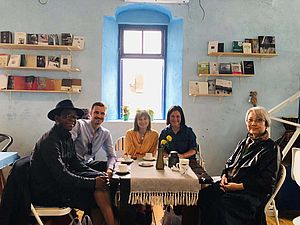 A five-member internationally renowned jury will select a total of 10 prizewinning works that are exemplary in terms of the contemporary developments in music theatre. Jury members are:

… is a dramaturge, librettist and stage director, active in the fields of opera, classical music and theatre. His work explores alternative forms of artistic collaboration and art curating, and aims at developing new platforms for social interactions in post-migrant societies. Lada is the founder and artistic director of The Airport Society — a nomadic cooperative of artists, activists and social entrepreneurs that initiates projects connecting recent developments in opera, technology and society. 2013-2016 Lada held the position of Director of Dramaturgy, Empowerment and Communication at the Belgian Royal Opera La Monnaie in Brussels. Prior to that, he studied dramaturgy and literary studies at the University of Amsterdam. As a dramaturge he has been collaborating with a range of stage directors and visual artists, incl. Pierre Audi, Ivo van Hove, Mariusz Trelinski, Berlinde De Bruyckere, Tobias Kratzer, Yuval Sharon and Kirsten Dehlholm (Hotel Pro Forma). He collaborated on opera and theatre projects with, a.o. La Monnaie, The Dutch National Opera, National Theatre of London, Polish National Opera, Opera in Poznan, National Forum of Music in Wroclaw, International Choreographic Centre in Amsterdam, and Studio Minailo. He wrote libretti such composers as Katarina Glowicka, Dariusz Przybylski, Andrzej Kwieciński and Annelies Van Parys. Lada initiated and curated several series of events and programmes, incl. United States of Opera (a forum for contemporary opera makers) and Fringe FUEL (a creative activism and professional empowerment programme for artists).

…is a composer, musician and librettist. Born in Soweto, he studied madrigal singing in Trieste, Italy. In 1996 he co-founded (with Masauko Chipembere) the acoustic pop duo, Blk Sonshine, and in 2008, co-founded (with Ntone Edjabe) the Pan African Space Station, a platform that hosts cutting-edge Pan African music and sound art on the internet. His recorded albums include: Blk Sonshine (1999), the listening room (2003), fire famine plague and earthquake (2007), good life (2009), Dipalo (2011),  toro tse sekete (2015) and Second-hand reading (2016). His other published works include the music plays, memory of how it feels (2010), the flower of shembe (2012) and the opera, heart of redness (2015). An alumnus of the Berliner Künstlerprogramm des DAAD (2016), he was also named Composer-in-residence at the Johannesburg International Mozart Festival (2017) and the National Arts Festival of South Africa (2017). He tours widely both as a solo performer, bandleader, choir conductor. He is a research affiliate at the University of Cape Town’s Drama School and the Centre for African Studies.

…is a Buenos Aires born, Mexico City resident, and former NYC resident creative producer. She currently works at La Teatrería in Mexico City. She is in charge of developing new collaborations between the theater and other local institutions as well as international networking. Because of her international scope as a citizen and arts worker, she has been invited to be part of the programming panel of the 2016 Made in Scotland showcase at the Edinburgh Fringe Festival, participate of the international advisory panel of PAMS choice 2015 in Seoul, Korea, and served as curator for Mid-Atlantic Arts Foundation ́s Southern Exposure in 2015 and 2017. Shoshana is an active member of ISPA (International Society for the Performing Arts) since 2014 when she was one of their global fellows. She currently seats in their membership committee, was part of the planning committee of the 2017 NYC Congress, and co-chair of the 2016 NYC Congress. Wherever she goes, she loves to build bridges – not walls – that bring together artists from all over the world, and loves to present innovative work to audiences who may not have been exposed to that type of work before. She is a firm believer that art can make us better people, and thus allow us to live in a better world.

…is a composer, vocalist, music producer, and author.

After graduating from the Central Conservatory of Music with a degree in composition, she published her award-winning novella You Have no Choice. Since 1980’s, Liu Sola has scored many Chinese and international film sound tracks, as well as TV and drama productions. She has composed music for orchestra, ensemble, opera, modern theatre, modern dance, and art exhibitions. Her range of musical styles include classical music, jazz, early music, rock, traditional and contemporary music. In 2003, she founded the Liu Sola & Friends Chinese Ensemble, teaming up with Chinese instrumental virtuosos. The Ensemble has toured internationally,  and from 2017 onwards, an annual national tour will be a part of its program. Liu’s music works include the chamber opera Fantasy of the Red Queen (2006), performed by Ensemble Modern and the Liu Sola & Friends Ensemble. Liu Sola is the dramaturge, librettist and music composer, artistic director, costume designer and leading vocalist. The chamber opera The Afterlife of Li Jiantong (2009) was performed by Theatre of Voices, conducted by Paul Hillier. Liu Sola wrote both the libretto and the music.

Her novels include Chaos & All That (1989), Nv Zhen Tang (2000), which has been translated into French and Italian, and Lost in Fascination (2011). Her recent book about her Ensemble The Nomadic Life of Sounds will be published soon.

Born in Israel, Limor Tomer moved to the United States at age 13. She earned a bachelor’s and a master’s degree at Juilliard School and studied for her doctorate in aesthetics at New York University. For 10 years she was a professional classical pianist in solo and orchestral performances throughout the United States and Europe.

Tomer transitioned from performance to arts management, where she worked closely with Harvey Lichtenstein at BAM on projects ranging from BAM Rose Cinemas to launching and programming the BAMCafe.  Following her tenure at BAM, she became Executive Producer for Music at WNYC radio, where she produced such award-winning programs as “24:33,” a John Cage celebration; “A Beautiful Symphony of Brotherhood,” about the Rev. Dr. Martin Luther King Jr.; and launched the Peabody-award winning web-based new music station Q2 (recently renamed New Sounds). Tomer served as Adjunct Curator for Performance at the Whitney Museum from 2005-11, and there she created the performing arts department and curated performance shows including “Christian Marclay: Festival, a collaboration with David Kiehl,” “Steve Reich@ the Whitney”  and “Meredith Monk Music @ the Whitney.”

She joined the Metropolitan Museum of Art as General Manager of Concerts and Lectures in July 2011, where she launched MetLiveArts, the world’s largest museum-based performance series, which features >90 classical and contemporary performances ranging from dance, theater, music, sound installations, performance art and hybrids from around the world, many of which are commissions, site specific or premieres.

Tomer was invited to serve as Performance Curator for the inaugural 2016 and 2017 June Events at the Stavros Niarchos Foundation Cultural Center (Athens, Greece) where she presented dance and music performances in multiple venues around the SNFCC campus.  She serves as a member of the National Curatorial Council of The Hermitage Artist Retreat in Sarasota, FL.