You Are My Loneliness

Wang Luobin was one of the most prestigious Chinese national composers in the 20th century. Since 1937, he was engaged in collecting folk songs of ethnic groups in Northwest regions of China. In all, he had edited and published over 1000 songs. He was thus honored as "The King of Folk Singer in Western Regions". As a musical theatre, this play sketched out his remarkable musical career and rich emotional world, including the persons or incidents which have inspired him in composing songs, especially his emotional life. All this play equipped with new instruments and music style, re-rendered his twenty-one most classic works which can truthfully reflect the loneliness, nostalgia and love in the depth of his soul. To a composer, music always make him lonely.

你是我的孤独 / You are my Loneliness (Trailer) from ITI Germany on Vimeo.

In the form of a musical play, You are my Loneliness sketches out Wang’s remarkable musical career, his rich emotional world, and the people and events in his life that most directly inspired his songs. At the center of this are his encounters with multiple women including, his first wife Luo San, a Tibetan girl named Zhuoma, his second wife Huang Yulan, and his romantic relationship with the Taiwan novelist Sanmao. These stories come together to demonstrate Wang’s belief in and pursuit of love.

You are my Loneliness is a musical play about Wang Luobin, one of the most prestigious Chinese national composers of the 20th century. In 1937, he began to collect folk songs from ethnic groups in Northwest regions of China. In total, he edited and published over 1,000 songs. The most well-known of these include: At a Faraway Place and The Crescent Moon Rises, both of which were selected by playwright Yu Rongjun and director Zhou Xiaoqian as the most classic “Western Chinese Folk Songs” of the 20th century. For this project, Wang was dubbed "The King of Folk Singers in Western Regions". He was the first Chinese singer to have the honor of singing national songs at the UN Headquarters in New York City. In July 1994, Wang received the Award for Outstanding Contributions to the Exchange of Western and Eastern Cultures from UNESCO.

Pei Shushu (producer) is a producer at the Shanghai Dramatic Arts Center.

Yu Rongjun (playwright) is a playwright, a State First-Class Screenwriter, the vice-president of SMEG Performing Arts Group, and the director of Shanghai International Contemporary Theatre Festival. From 2000 to 2015, nearly fifty productions of his work were staged at dozens of theaters, which won a number of professional awards both within China and abroad.

Zhou Xiaoqian (stage director) is a State First-Class Director at the Shanghai Dramatic Arts Center. She has won the Director Award at the Sixth Annual Chinese Drama Golden Lion Awards in 2007 and the Best Actress Award at the Seventeenth Annual Zuo Lin Drama Awards in 2013.

Zhao Guang (musical director/ arranger/ orchestrator) is the Dean of the Department of Musical Plays at the Shanghai Conservatory of Music, where he received his doctoral degree. He is also a Deputy to the National People’s Congress of China.

Xue Chen (stage manager) is a State Second-Class Stage Manager, and works as a stage manager at the Shanghai Dramatic Arts Center.

Dong Guiying (costume designer) is a character designer at the Shanghai Dramatic Arts Center, who won the first "Character Design Academy Award" issued by the Chinese Stage Artists Association in 2010 and the "Stage Art Award" of the Ninth Annual Chinese Drama Golden Lion Awards in 2014.

Wan Bo is an actor in Shanghai Dramatic Arts Center, graduated from the Department of Musical Play of Shanghai Conservatory of Music.

Pan Qi graduated from the Department of Musical Plays at the Shanghai Conservatory of Music.

Cao Yang is an undergraduate in the Department of Musical Plays at the Shanghai Conservatory of Music. He won the Silver Award for Best New Artist in the Sixteenth Annual Oriental Billboard Year Award, and the First Class Award at the Fifteenth Annual Campus Music Pioneers Original Song Contest.

Dong Ziyuan (drums) graduated from the Shanghai Conservatory of Music. He took first place in the category of Drums for Juniors at the National Youth Percussion Competition in 2008, and won first prize for Youth in 2009.

Zhang Tianchi (bass) is a professional guitarist and an independent musician. He has expertise with the electric guitar, acoustic guitar, and the ukulele. He has also played in many large-scale symphonic concerts.

Li Xuan (violin) is an undergraduate at the Shanghai Conservatory of Music.

You are my Loneliness uses contemporary instruments including drums, violin, bass, guitar, and piano in combination with musical styles to revisit his twenty-one most classic works and Olive, the representative of Sanmao’s lyrics, which truthfully reflects the loneliness, nostalgia and love at the bottom of Wang’s heart.

“You are my Loneliness cleverly weaves in new interpretations of classic Chinese songs within an original score that celebrates many musical forms from jazz to cabaret, pop and rock. THe work is highly accessible, the script is not florid, yet it produces deep emotions. The actor delivers the lines with gravitas, revealing a life that is ultimately lonely, despite his colorful life of travels and strange encounters.

The set and costume are similarly effective, and not overly done. Together they suggest the void and despair that the protagonist carries with him.

The Music Theatre NOW jury acknowledges the playwright and the Shanghai Dramatic Art Center’s tireless efforts to champion the creation of new works, and hopes with this special recognition that it will continue to build a repertory of works for its viewers.”—MTN Jury 2015 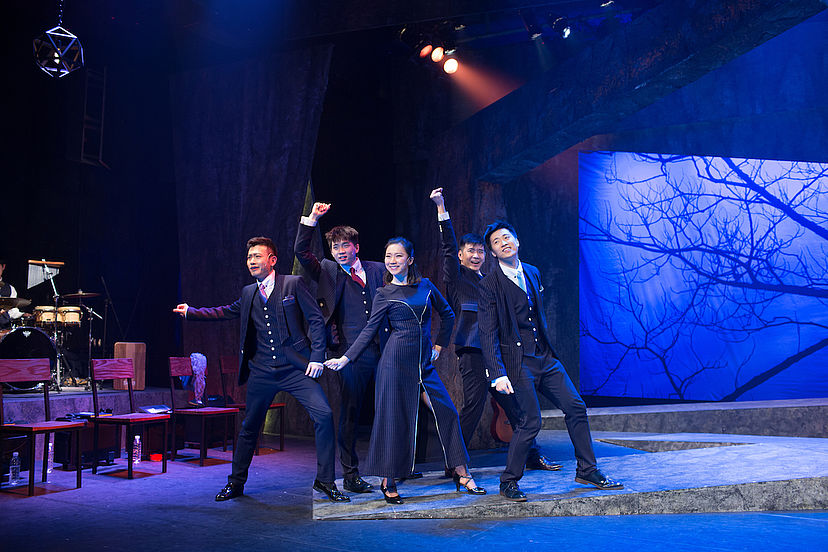 Your are my Loneliness © Shanghai Dramatic Arts Centre