This work does not pretend a recreation of the Aztec world, neither is a folkloric show. It rather achieves a new way to use tradition, linguistics and poetry in order to create a completely new, contemporary opera.

For almost five centuries, historians and specialists thought that indigenous Mexican music theatre had been completely destroyed by the Spanish conquest of Mexico. Some chroniclers reported that this rich tradition was fully absorbed by and transformed into Christian theatre pieces during the religious conquest of Mexico, which imposed European models. It was only a few decades ago when historian Miguel Leon-Portilla and even more recently anthropologist and linguist Patrick Johansson began a systematic research effort to prove that one text, entitled Xochicuicatl cuecuechtli (Ribald Flowersong), was in fact an original example of the Mexican music theatre genre “cuecuech” [ribald-sacred] from the pre-Columbian era. Mexican composer, historian and musicologist Gabriel Pareyon devoted ten years to uncovering the subtleties of this poem as a dramatic plot and composing a musical score in Nahuatl (the language of the Aztec-Mexica people) with instruments and vocal inflections native to Mexico. This is the first work in this native style since the defeat of emperor Montezuma in 1520.

Xochicuicatl cuecuechtli is comprised of twenty-eight scenic farames, with six characters performed by five performers (who follow their own score, which includes lyrics, vocalization gestures, and dancing steps), and twenty musicians on stage playing over the course of one hour.

(Composition, Text and Subtitles) is a polymathic Mexican composer and musicologist. He has a Ph.D. in Musicology from the University of Helsinki, where he studied with Eero Tarasti (2006–11). He received a bachelor's and a master's degree in composition at the Royal Conservatoire in The Hague (2000–04), where he studied with Clarence Barlow. He previously studied at the Composers’ Workshop of the National Conservatoire of Music in Mexico City (1995–98). When Pareyon was still a young composer, several of his works were selected for the World Saxophone Competition for Composers (Bangkok, 2006, I Prize), the 2nd International Jurgenson Competition for young composers (Moscow, 2003, II Prize) and the 3rd Andrzej Panufnik International Composition Competition (Kraków, 2001, III Prize). As a musicologist, Pareyon is the author of texts that have raised international awareness about contemporary music from Mexico.

(Musical and Stage Direction) is a percussionist and music-scenic improviser/composer, who began his career as a drummer, studying percussion at Ollin Yoliztli in Mexico City. In 1996 he began training in Aikido, eventually obtaining first black belt, granted by the Dan Aikikai Foundation in Tokyo. Since 1986 he has taught percussion, music and dance at Ollin Yoliztli. He also teaches film music at the University Center for Cinematographic Studies (CUEC-UNAM). In 2010, after more than twenty years of working with Mesoamerican percussion instruments in various musical and scenic areas and studying the Nahuatl language and culture, Navarro-Noriega founded KUAUHKIAUHTZINTLI, a company of contemporary Mexican percussion, music and dance with Mesoamerican instruments, which has held public performances across Mexico, Peru and Spain. With KUAUHKIAUHTZINTLI he produced the album Tlaltekuinilistli in 2014, and premiered Gabriel Pareyon’s Xochicuicatl cuecuechtli in 2015.

The symbolic complexity of “cuecuechcuicatl”—the operatic genre of the Mexican erotic-philosophical tradition—demonstrates the existentialist conception of sexuality in the Aztec universe as a “return” to death. The opening sound of a conch (Lobatus gigas) gestures toward the myth of human gestation in the underworld, where the breath of Quetzalcoatl penetrates the conch (a female symbol), and then sound enters into the divinity of death (Mictlantecuhtli), fertilizing it. Thereafter the demiurge Quetzalcoatl adopts the shape of a Cuicamatini (Master Singer, a bearer of wisdom), who teaches music to three ahuianis (i.e. young women or erotic “enchanters”), who in turn learn how to prepare food from maize before learning to dance.

The world of the ahuaianis is disturbed by the arrival of a stranger: the Tohuenyo, a Huastec, agile and attractive young man who seduces the three women. After a lustful romp with a climatic dance (mitotl), the ahuaianis leave the Tohuenyo, who discovers his destiny in loneliness and darkness. The plot changes when the god Xochipilli—patron of blossoms, color, poetry and music—suddenly appears, bringing a present for the Tohuenyo: an ocarina [huilacapiztli], the symbol of sex and death, which refers to the ephemeral nature of the sexual act and human existence. In short, the work refers to sex as a metaphor for life: intense and brief, spirited and fleeting.

At the end of the piece, Xochipilli articulates a key phrase: “As for a painting, hand well the black, hand well the red”. This concept combines the essence of the profound philosophy of ancient Mexico: an invitation to appreciation, sensitivity and balance, counseling on sexuality, music and dance, and the vital meaning of flowers. This piece invites us to contemplate our journey from the black to the red, and then from the red back to the black.

“With Xochicuicatl cuecuechtli, Mexican musicologist and composer Gabriel Pareyon has created the first modern "opera" written in Nahuatl (the Aztec language). The libretto is based on a collection of songs written in the 16th century. Pareyon has notated the score using native Mexican symbols and original sound representation, creating a more  visual representation that a traditional score.

This production has found a great success in Mexico. Audiences relate extremely well to the source material, and are very excited about the result.”—MTN Jury 2015 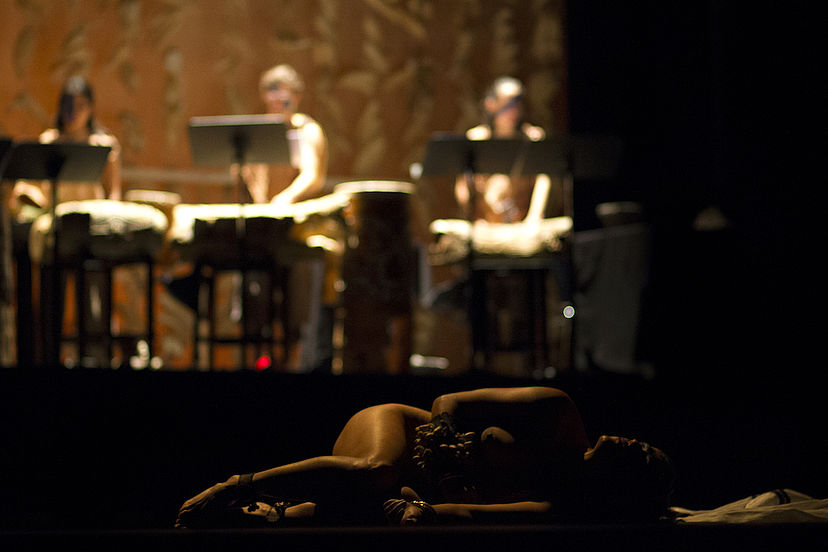 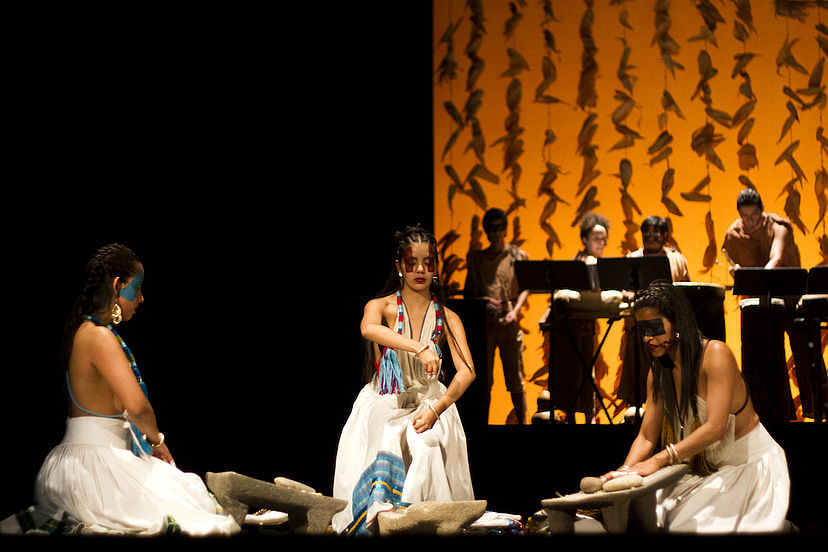 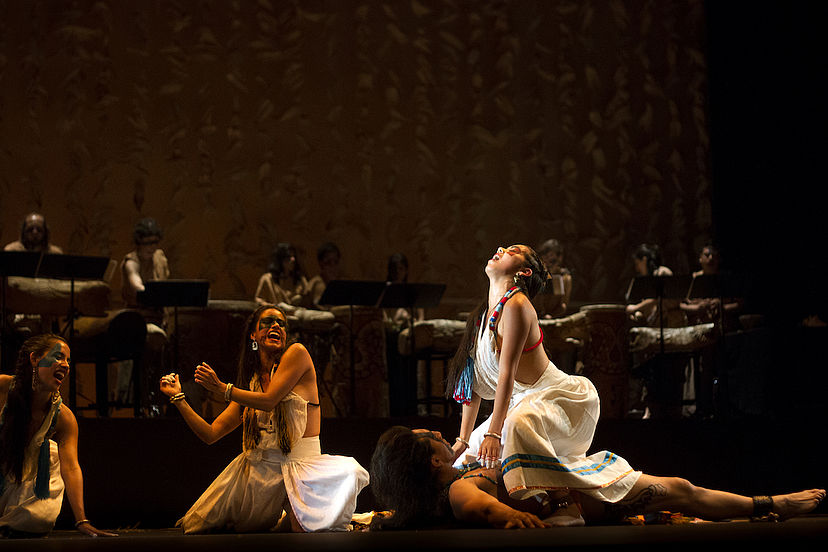 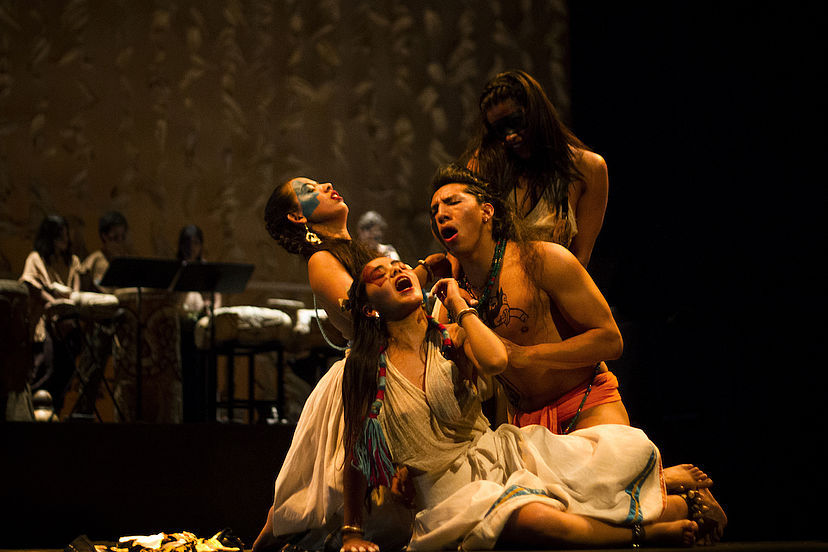 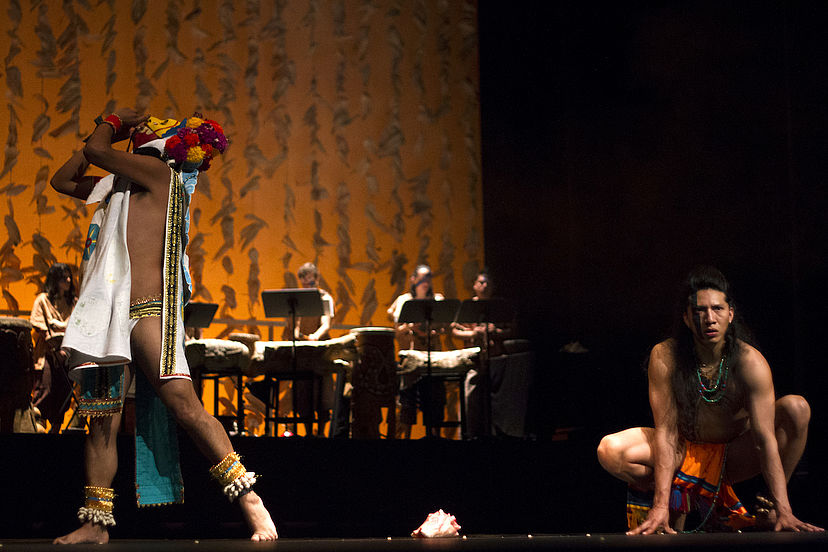