WIDE SLUMBER for lepidopterists pairs sleep and dream studies with lepidoptery, conjuring an ethereal and visceral world of cyclic metamorphosis.

Tracking the stages of sleep and pairing them with the life cycle of Lepidopterae (butterflies and moths), the audience is lulled into a cocoon where the borders between dreams and reality are blurred.

A small group of musicians accompanies three singers who embody personae within WIDE SLUMBER; The Insomniac, The Somnopterist and The Lepidopterist. A hybrid loom — a dream machine — is a centre-stage object that undergoes constant transformation in the hands of the fourth character; The Weaver.

“Wide slumber is an investigation of relationship, of intimacy, of intrusion, of between, of boundary. Its realm desires to identify assumptions and then stroke them to the point they shudder and release their lenses, films, gauze to expose some yet-unimagined beyond.”

Inspired by the award-winning book of the same name by poet a.rawlings, Wide slumber for lepidopterists pairs sleep and dream studies with lepidoptery (the study of butterflies and moths). Tracking the stages of sleep and pairing them with the life cycle of butterflies and moths, insomnia is mirrored in the birth of the egg and narcolepsy in larval hatching. And when the caterpillar starts its final moult, dreams begin, weaving around us as tightly as a cocoon until we are somnambulant, a chrysalis ready to emerge as a moth.

It has elements of story.

A small ensemble of musicians—three singers and one performer—conjure an ethereal and visceral world of cyclic metamorphosis. Each of the three singers embodies a persona within the text; the Insomniac, the Somnopterist (sleep scientist), and the Lepidopterist. A hybrid loom—a dream machine—is a centre stage object that undergoes constant transformation in the hands of the fourth character: the Weaver.

Even when the body falls asleep, the brain's hearing pathways do not shut down. Even in the hours of deepest slumber, sound can be imprinted on your memory.

A team of scientists including Harvard University lepidopterists and University College London sleep research scientists worked closely with us on the creation of WiDE SLUMBER. We have curated a series of events that can be presented in tandem with the performance including a butterfly pinning workshop, lectures on the metamorphosis of butterflies and sleep science, and installations.

WiDE SLUMBER for Lepidopterists is produced by VaVaVoom Theatre and Bedroom Community and was premiered in May 2014, at the 28th edition of Reykjavik Arts Festival.

has earned acclaim for his three solo albums and a steadily growing number of works for orchestras and ensembles across Europe and North America. He has written music for film, dance and theatre as well as appearing as producer, engineer and arranger on over one hundred albums. In all of his projects, Valgeir bends and blends familiar sounds to expose the new within the known, resulting in a body of work ripe with emotion, curiosity, and humanity.

is a record label and an artist collective operating across geographical and musical borders from its home base in Iceland. Founded in 2006 by Valgeir Sigurðsson, with Nico Muhly and Ben Frost, the roster is made up of creatively diverse artists whose many ambitious projects have seen them reach into every corner of contemporary music and art. Drawn to the murky spaces between genres they uniformly support one another’s forays into this murk.

is a Canadian poet, editor, and interdisciplinary artist. Her genre-bending work embraces acoustic ecology, counter-mapping, improvisation, and ecopoetics. Her literary debut Wide slumber for lepidopterists (Coach House Books, 2006) received an Alcuin Award for Design. She is the recipient of a Chalmers Arts Fellowship (Canada, 2009) and held the position of Arts Queensland Poet-in-Residence (Australia, 2012). Her poetry has been translated into Dutch, French, Icelandic, Korean, and Spanish.

is a visual theatre company based between London and Reykjavík, founded in 2011 by Icelanders Sara Martí and Sigga Sunna Reynisdóttir. Sigga Sunna is an interdisciplinary theatre artist working across puppetry, design, devising/ new writing, and dramaturgy. Sara Martí is a director and an actress with a sharp eye for painting the performative space with insightful use of lighting design and video projection. Joined by their mutual passion for evoking their audience’s imagination, they tell stories through experimental puppetry and object theatre, movement, video animation and innovative scenography.

VaVaVoom received Tallinn Treff Festival Awards for Hands Up! in 2011, and was nominated for “Innovation of the Year” and “Music of the Year” at the Icelandic Performance Arts Awards in 2013 for their critically acclaimed performance Breaking News, which was performed at the National Theatre of Iceland and Summerhall during Edinburgh Fringe Festival 2013.

“Looking at the pages of Wide slumber for lepidopterists felt like reading a graphic score, pages filled with music and possibility. But a.rawlings’ text doesn’t contain any traditional characters. So by sinking our teeth into the poems and a mountain of research, we hatched out four of them. Three of these characters are not directly aware of one others’ presence. And even when all three sing simultaneously, they still inhabit separate worlds. The music reflects this. In a quasi-song-cycle structure it flutters from the ornate trills of the viola da gamba to static or arpeggiated organ tones, from percussive stabs to computer generated texture. Rhythms often suggested by breathing patterns, wingbeats, or sleep states. The fourth character is the silent force that drives our story/ non-story. Therein her music drives the motion and manipulation.” Composer Valgeir Sigurðsson

“This full-length music theatre production begins with a solo female musician, and evolves into one male and three women vocalists within a vivid immersive visual environment. It is an ethereal physical environment, which references the lives of butterflies and caterpillars. A dreamscape of voice, live music and compelling visuals. This work took the jury completely by surprise with its somnolent quality a kind of Gesamtkunstwerk of artistic forces coming together. It stood out from all of the works submitted. A stunning artistic achievement, it achieves an exceptional plateau of aesthetic value. It stands on its own artistic merit, providing a compelling and engaging experience.” – MTN Jury 2015 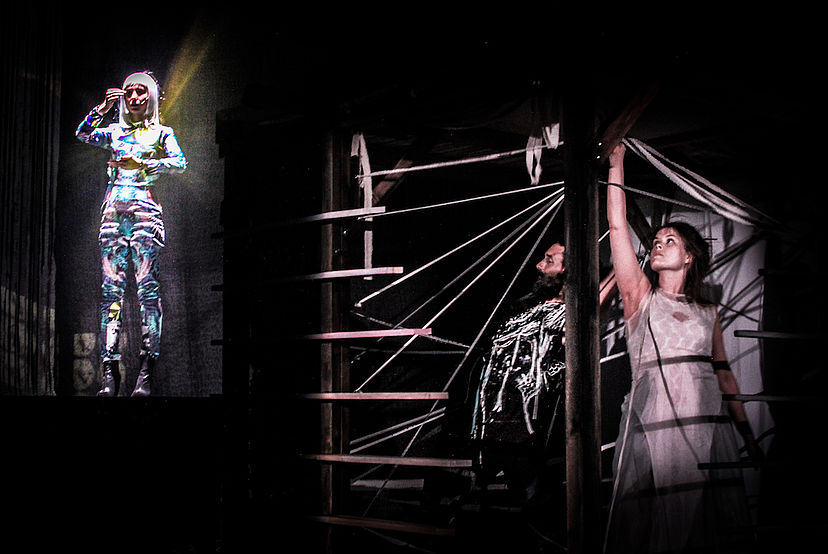 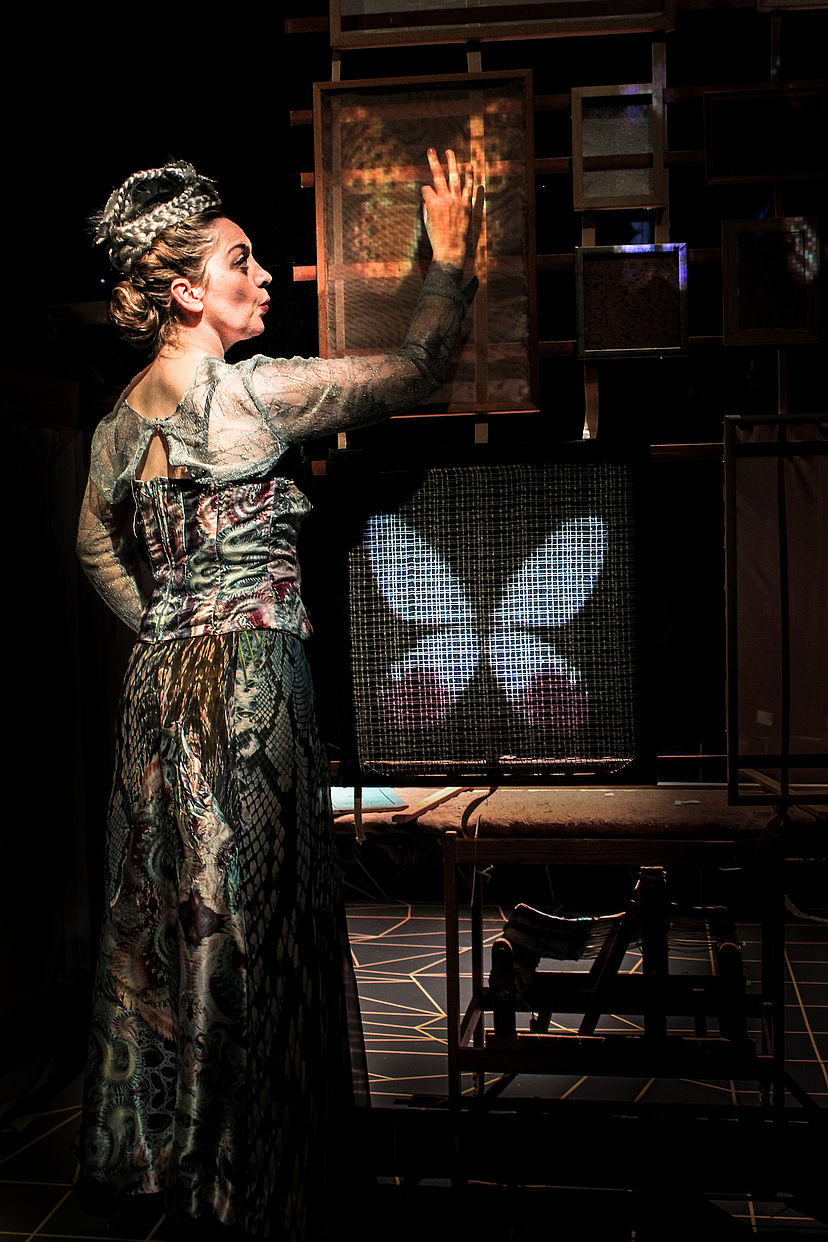 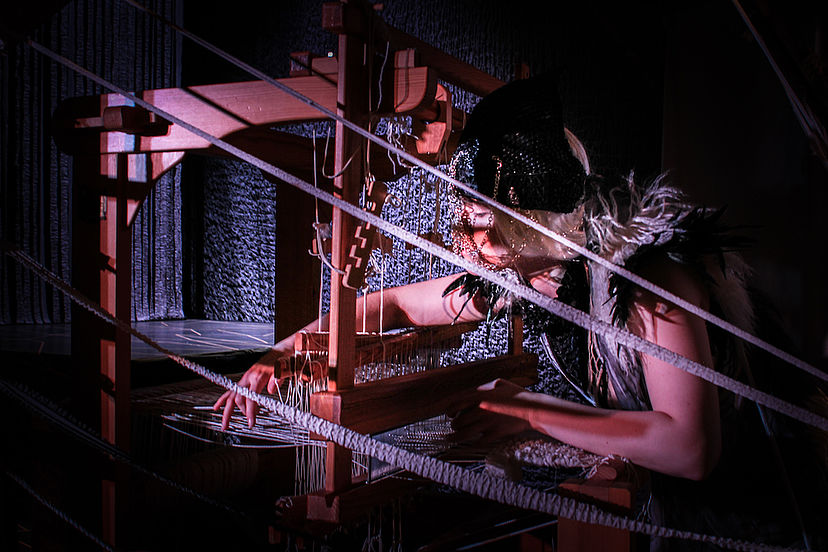 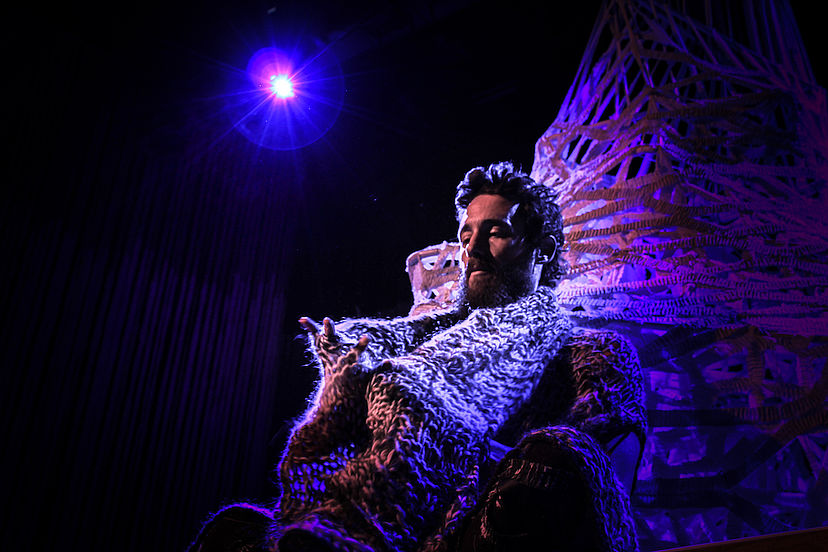 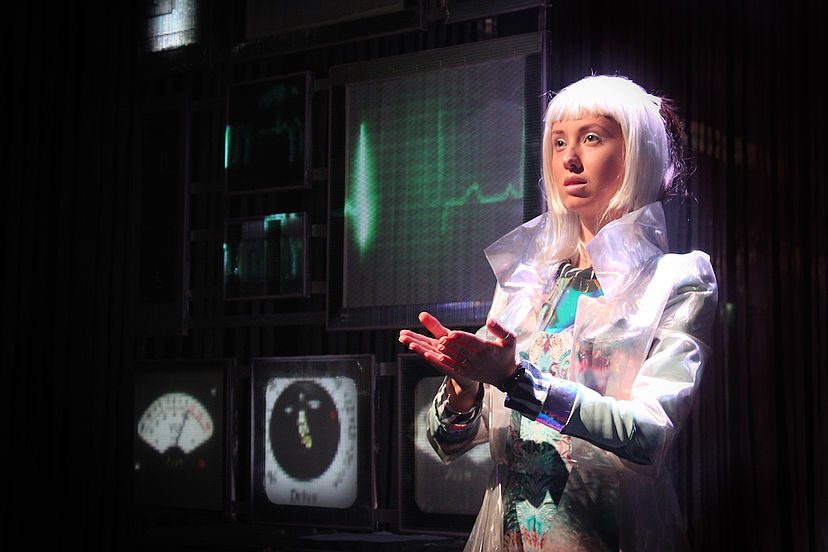