Production of the BOOOM CIE, in co-production with Théâtre Arsenic

in Lausanne. This project was supported by City of Lausanne, Loterie Romande, Pro Helvetia,

In this Remake of Salomé, the story is told in a temporal flashback. We see her, alone, appearing on stage at the end of the tragedy, after everything’s already happened: the repugnance to the king Hérode, the duo with Iokanaan, the dance of the seven veils, and the murder of the prophet. Musically, a transition from a contemporary Sprechgesang (spoken singing)  to opera singing is made, whilst the madness of Salomé increases. After this long prologue, we find ourselves in a cosy german cabaret atmosphere, and Salomé reappears, fresh and smiling, singing “Lunacy” accompanied by a live pianist, lamenting her love for Iokanaan.

Just for one musician and one singer-actor, there is a bit of Lynch, a bit of Robert Ashley or even a bit of Phantom of the paradise in this strange version of Salomé.

Salomé is the third and finale episode of the trilogy Opera Serie: adaptations of three celebrated opera libretti: Orpheus, Othello, and Salomé. Over the course of a single season, these three famous operas were explored by composer Christian Garcia-Gaucher and the BOOOM Cie, creating three new, short, and accessible versions for both the initiated and uninitiated audience.

As in the two previous episodes, Salomé was conceived for a single performer and a musician, in this case Evelinn Trouble in the title role and Christian Garcia-Gaucher as the pianist.

In this way, Salomé is not a new staging of the original opera score by Ricard Strauss, but rather a new show based on the same libretto. That is, the text is Wilde’s original and the music has been recomposed. Christian Garcia-Gaucher mixes his classical background with his long experiences in the rock and experimental music scenes.

The temporal structure of the piece is a flashback. Everything we see has already taken place: Salome's repugnance for King Herod, her meeting with Iokanaan (John the Baptist), the Dance of the Seven Veils, the murder of the prophet, and the madness of Salomé kissing John the Baptist’s decapitated head.

has been a member of the Lausanne-based collective Velma since 1997. As a musician, composer and director, Garcia-Gaucher has been working for fifteen years on different forms of music, looking at their codes and dramaturgy. Since 2010 under the name of -BOOOM CIE-, Christian Garcia-Gaucher has been developing this genre, which mixes music, performance, and theatre. That same year, he created three projects: Pastiche at the Stadttheater Bern, Au nom du people (a site specific project for chorus which has been performed in the courthouses of cities such as Buenos Aires, Berlin, Warsaw, etc.), and Glissando, a large project at the Theatre de la Ville in Warsaw for nine Polish and European actors about Chopin's life for bicentennial anniversary of his birth. In 2012, Teenage Lobotomy—a lighter piece for two actor-musicians—investigated manipulation, illusion and propaganda. Then in 2013 began his Opera Serie project with Orpheus as the first episode, and followed by Othello and Salomé in 2014.

is an Albanian soprano and violin player living in Belgium. She finished her masters studies in voice and violin (Magna Cum Laude) at the Luca Lemmens Institute in Leuven (BE). Ana dares to take on different musical disciplines thanks to her amazingly wide and warm vocal range and great improvisational skills. In recent years, Ana has been working closely together with music theatres, producers and ensembles such as: Walpurgis, La Monnaie (Brussels), LOD, Aquarius, Zuiderwind, Blindman[4x4], Haftcraft, ’t Arsenaal, Silbersee, Grand Théâtre du Luxembourg. She is currently a freelance musician at the Opera of Flanders (Ghent & Antwerp), and a regular soloist at the Camerata Sancti Pauli (Antwerp). In June 2016, she will perform in the opera “Cosi fan tutte” (W.A. Mozart) in the National Theatre of Opera and Ballet of Albania (Tirana).

Similarly to past performances of Christian Garcia-Gaucher’s, the musical composition of Salomé is a mix of organized improvisation, singing, live music and recorded electro-acoustic music. Priority is always given to emotions, the total rhythm of the piece, and the understanding of the text.

In this Salomé, there are two distinct parts: after John the Baptist’s decapitation and before. At the beginning of the piece, Salomé enters the stage covered in blood, telling us her memories. This flashback serves as a plot summary for those who may not be familiar with (or may have forgotten) the original opera. Here, the composition is in the form of a semi-spoken delirium with musical relationships to  Laurie Anderson and Robert Ashley. The musical focus is placed on Salomé’s expression of the text, that is, the height and speed of the words, the dynamics, the intentions, and the silences between words. This simple vocal material allows the audience to feel the character’s madness, immaturity, tantrum, and impatience.

After this scene, the atmosphere suddenly becomes lighter. Everything is like a game, and the music is composed like songs. As a result of the first part, the audience already knows the whole story and does not need supertitles. Instead they can relax and enjoy the songs and music coming from cabaret. The encounter between Salomé and a living John the Baptist is sung a cappella by the two performers. And a long musical piece—which may remind some spectators of Phantom of the Paradise—crosses several emotional states, harmonies, and energies. All of the ambiguity and madness of Salomé is found in the final sequence: love, hate, frustration, youth, vengeance, pride, doubt, immoderation, etc. This last scene leads us directly to the murder of John the Baptist.

“An unconventional cabaret environment with the audience standing in the space, Salomé begins with spoken dialogue and develops into a solo vocalist in the role of Salomé performing a monologue with recorded music supporting her as she reflects on John the Baptist. As the production unfolds, a male piano player emerges before Salomé returns with a bloodied wrap and begins to play an LP of Strauss’ opera.

What was particularly powerful in this work was the intimacy of the cabaret environment, bolstered by the singer’s mesmerizing performance. There is a mystery to the character placed before you, as though you were a guest in a private room, where her secrets might  be shared or revealed only to you. There is a weirdness and strangeness to the performer’s taking you on her musical journey. This is a unique accomplishment in that this original conceptualization makes strong use of a non-traditional, idiosyncratic space without proscenium arches or fixed seats.

It remains an unorthodox, visionary rendition of an ancient tale within our contemporary performance environment.” – MTN Jury 2015 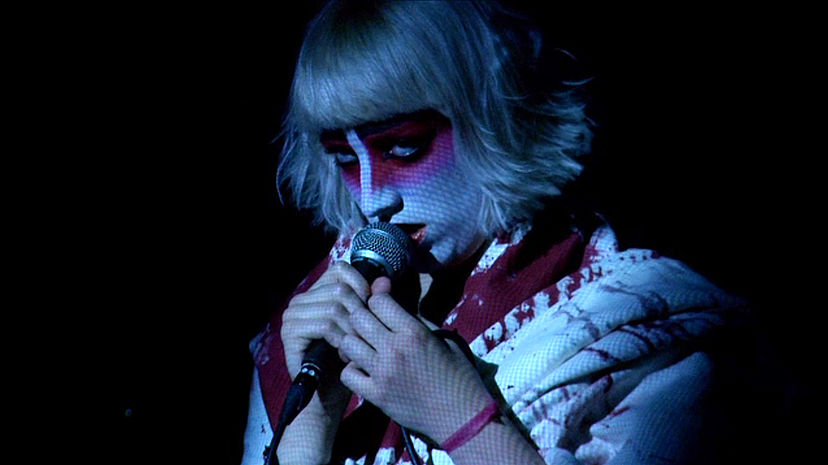 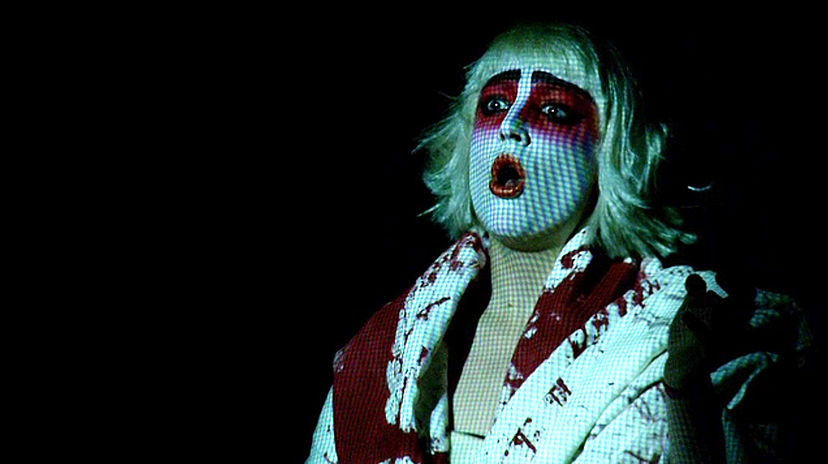 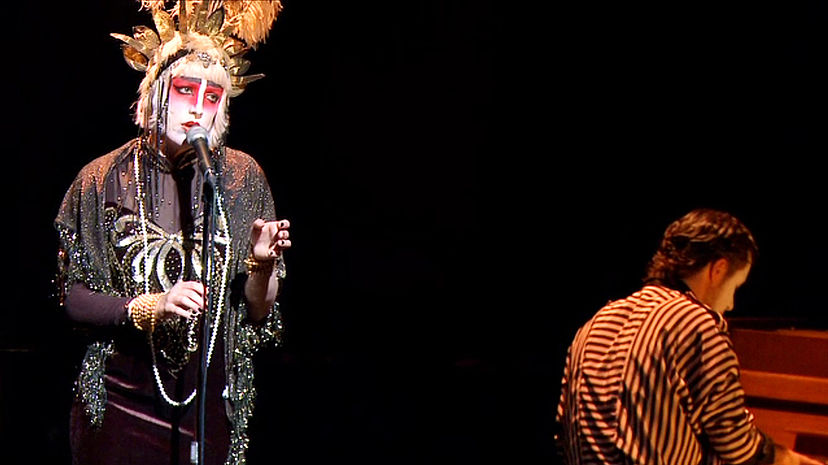 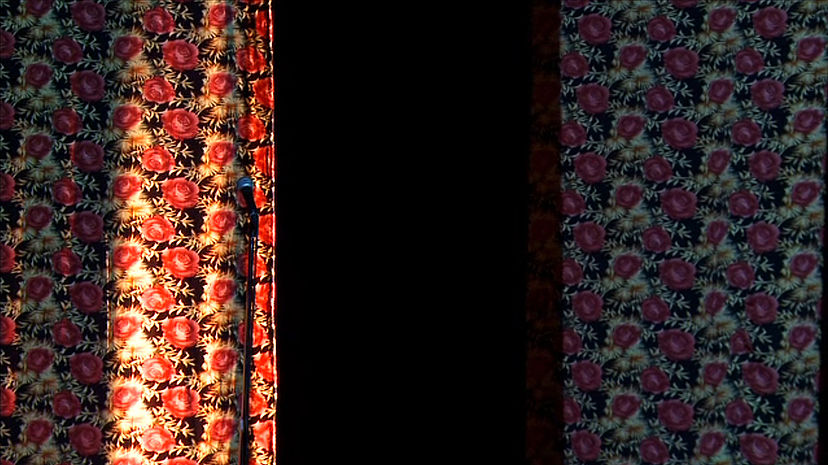 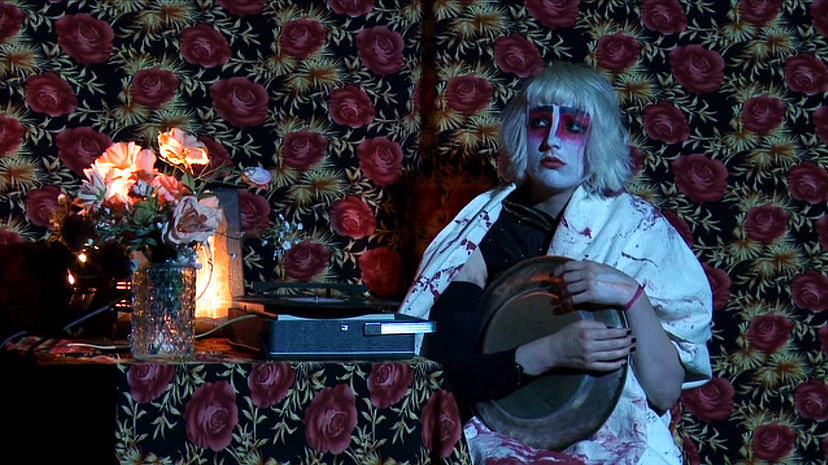