Paradise Interrupted is an arresting new installation opera that poetically weaves the myths of the Garden of Eden and Peony Pavilion with composition that merges 600-year-old Kun opera with contemporary Western opera. The narrative follows a woman searching for an unattainable ideal in a world activated by her singing voice as she attempts to return to the Garden. Interactive technology enables a vast garden and a host of digital characters to interact with the protagonist and respond to her voice.

The one-act opera Paradise Interrupted weaves together a story inspired by both the biblical Garden of Eden and the Chinese love story The Peony Pavilion. For the score, composer Huang Ruo musically integrates the spirit of Chinese tradition dating back to the Ming dynasty with new idioms of today. The narrative follows a Woman who searches for an unattainable ideal in a world activated by her voice. As she sings, a vast garden grows from an empty stage, and a host of characters come to life to accompany her on her journey. These characters are created with live projections, generated by interactive technology. The Woman’s singing, emotional delivery, and vocal characteristics affect the characters, activating them as digital actors while remaining elusive. The garden installation is created by visual artist Jennifer Wen Ma, who also serves as the opera’s designer and director.

Paradise Interrupted was co-commissioned and co-produced by the Spoleto Festival USA, the Lincoln Center Festival, the National Kaohsiung Center for the Arts, and the Singapore International Festival of Arts. Excerpts were presented at the Temple of Dendur at the Metropolitan Museum of Art in 2015. Its world premiere took place at the Spoleto Festival USA in 2015, and it will be presented again at the Lincoln Center Festival in 2016. It will also serve as the inauguration of the National Kaohsiung Center for the Arts in 2017.

has been cited by The New Yorker as  “one of the world's leading young composers.” His inventive musical voice draws equal inspiration from Chinese ancient and folk music, Western avant-garde, rock, and jazz to create a compositional technique he calls “Dimensionalism.” Huang Ruo’s compositions span across orchestra, chamber music, opera, theater, modern dance, sound installation, folk rock, and film. His music has been performed by the New York Philharmonic, Philadelphia Orchestra, San Francisco Symphony, National Polish Radio Orchestra, Washington National Opera, Houston Grand Opera, Chamber Music Society of Lincoln Center, Asko/Schoenberg Ensemble, Remix Ensemble, and Quatuor Diotima. Huang Ruo's opera Dr. Sun Yat-Sen, was given its American premiere by the Santa Fe Opera in 2014, and will have its Canadian premiere by the Vancouver Opera in 2018. He was recently named the composer-in-residence for the Royal Concertgebouw in Amsterdam. Huang Ruo is currently a composition faculty member at the Mannes College of Music, and he is the Artistic Director and conductor of Ensemble FIRE (Future In REverse).

Qian Yi is internationally renowned for performing the lead role of the epic twenty-hour production of The Peony Pavilion, which was presented at Lincoln Center Festival in 1999. Her performance has been widely acclaimed by critics and audiences alike, garnering such superlatives as “radiant” (The New York Times), “incomparable” (The Wall Street Journal), and “spellbinding” (New York Magazine). She has starred in numerous re-workings of Chinese opera for Western theater including Ghost Lovers (Spoleto Festival USA 2002), The Orphan of Zhou, and Snow in June. The Chinese Ministry of Culture recognized her as one of the country’s finest kunqu actors. In 2008, she had her Western opera premiere, singing a leading role in the San Francisco Opera’s new production of Stewart Wallace’s The Bonesetter’s Daughter.

“Chinese Kunqu opera is a six-hundred year-old tradition, in which the singer not only sings and acts, but also dances in accordance with the dramatic and emotional needs. To create a new opera that brings together both Kunqu and Western opera technique is not an easy task. Instead of simply pasting the two traditions together, I sought to create all the vocal and orchestral music anew and organically while highlighting each of the very different traditions, aesthetics, styles, and characters.

“The music for the Woman, inspired by the traditional Kunqu opera spirit and aesthetics, depicts various stages of her quest and transformation, at times dreamy, at times playful, at times alluring, at times willful. The music for the Elements, floating in a connected yet alternate sonic world, also reflect different dramatic roles and characters: the calling of the wind, the gathering of the fireflies, animalistic howls, the trap of temptation, and the chanted destruction of the paradise that transforms into a pool of ink.” – Composer, Huang Ruo

“I was privileged to have had the chance to review this submission. It truly breathes life into one of the oldest Chinese opera forms, kun, making it exciting and accessible for audiences today, and perhaps inviting them to dig further back into its roots—specifically to The Peony Pavilion, the opera which inspired Paradise Interrupted. The original music is refreshing and adeptly written by Huang, who seamlessly weaves influences from both East and West.  Huang doesn’t so much jettison the traditional tropes, but rather develops them. His choice of the famous kun singer, Qian Yi, demonstrates this.

The orchestration is sparse, but effectively used. An otherwise Western chamber ensemble is peppered with the Chinese flute (dizi), and Chinese lute (pipa), and mouth organ (sheng), all to add color and sonorities to the score.

Everyone in the panel agreed that the scenography is gorgeous, featuring stark contrasts of black and white with scenes of iridescent color. Video projections sit comfortably with large paper cut-out sculptures. Ma’s attention to detail is obvious – every scene is a perfect assemblage, and shows well as an art installation in a museum.

This work propels tradition to a new vantage point, and deserves to be a winner in this competition.”—MTN Jury 2015 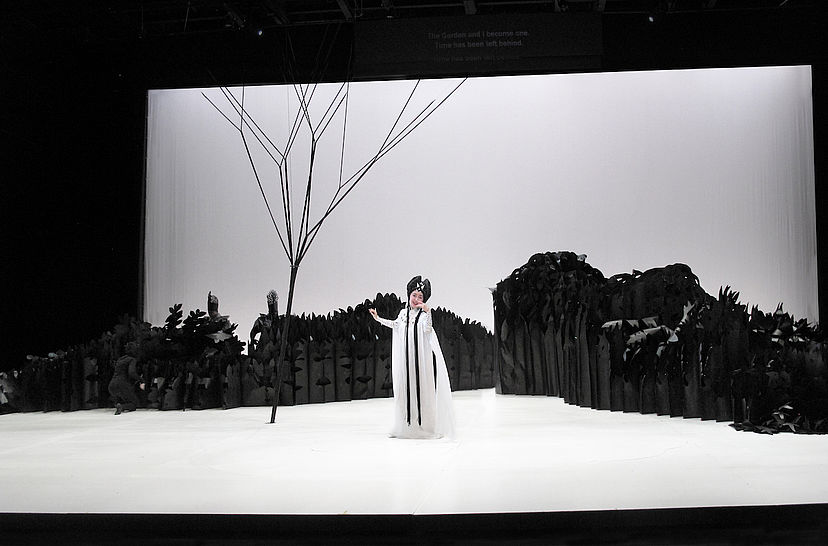 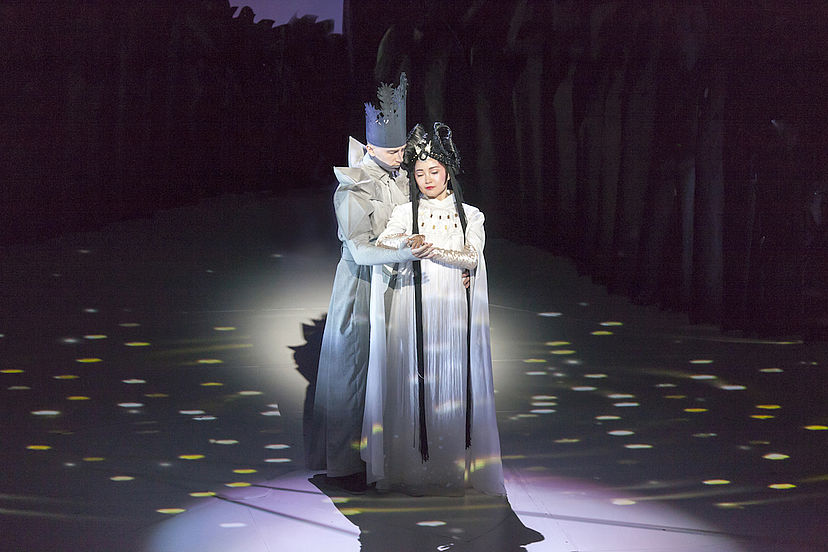 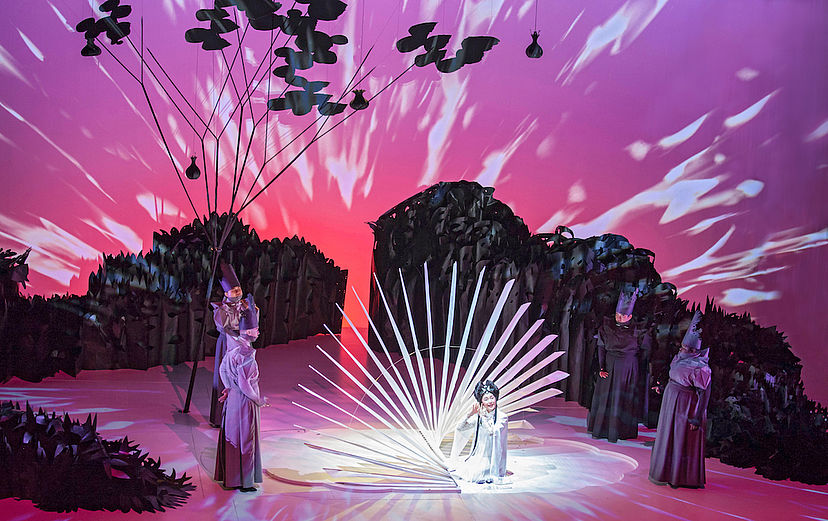 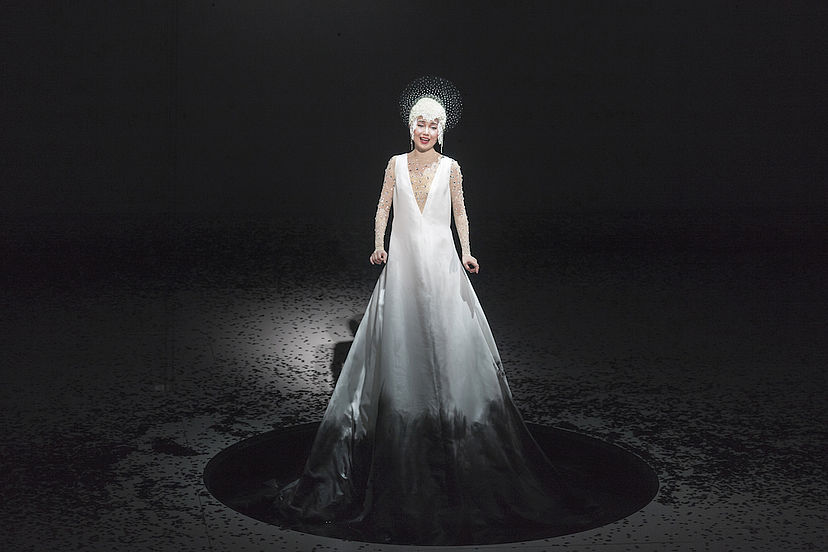