“Musicophilia” is based on Oliver Sacks' bestseller on brain and music, touching the creating or listening to music, deals with the categories of harmony, the area between sound and music. Selected cases are presented,  people falling out of their „normality“ due to neurological diseases: a composer who through an accident loses her capacity for polyphonic hearing. Or the student manically translating whole lectures into songs because her brain memorizes the spoken word as music. Thus the audience can experience what it means when the senses run riot. Steffen Wick and Simon Detel have composed the music, using unusual instruments such as a toothbrush. Stefano di Buduo has created hypnotic video sequences reacting on specific frequencies. There is Sacks himself and several of his patients, impersonated by the two musicians and the singer /actress.

What is normal? When does strangeness turn  pathological? What does it mean when the senses run riot? In “Musicophilia”, Meta Theater Munich presents people falling out of their “normality” due to neurological diseases. Their perceptions are the starting point for our artistic journey combining music, video, light and theatre to guide the audience through a series of breath-taking experiences.

Oliver Sacks' bestselling book Musicophilia assembles his exciting, precise observations on the nature of the human response to music. Our project Musicophilia is based on nine case studies from Sacks’ book, which inspired us to bring these “Tales of Music and the Brain” to life.

The characters emerge out of huge test tube-like cylinders, and are wrapped in sound, seduced or haunted by it, and begin to tell the audience their tale. There is, for instance, the little boy who sees his favourite tune in blue, the girl who listens to her father blowing his nose in C major, the composer who accidentally loses her capacity for polyphonic hearing. There are patients suffering from Tourette’s, Alzheimer's, and dementia who learn to master their everyday lives with the help of music. There is Sacks himself, enriched and humbled by his experiences, and, there is, of course, music—music as sound, as noise, as light, as memory, as obsession, as an invitation to go on a journey.

For over thirty years, Meta Theater Munich has been making its mark with international tours across Europe, the US, and Asia. It has developed a production style characterized by a precise combination of movement, contemporary music, poetic language, and light design. It encourages and presents an exciting clash of cultures, mixing experimental performance forms with non-European theatrical traditions.

Steffen Wick composes for, among others, the Bregenzer Festspiele and for ensembles such as the Acht Cellisten der Wiener Symphoniker and the Stuttgarter Kammerorchester. His works have been published at Sony Classical.

Norbert Niemann has been decorated with, among others, the Ingeborg-Bachmann-award, the Clemens-Brentano-award and the Carl-Amery-award for Literature.

Cornelia Melián founder and head of Micro Oper München. She specializes in old and new vocal music and works as vocal coach at the Residenztheater München and the Mozarteum Salzburg.

Mathias Beyer-Karlshøj has been a core member of the Henschel-Quartett since 1994.

Dr. Gabi Sabo is a theatre director and PR manager.

Axel Tangerding founded the Meta Theater in 1980, and is the current Artistic Director. In 2002, he received the Cross of the Order of Merit of the Federal Republic of Germany.

Steffen Wick and Simon Detel’s music uses unusual instruments like a toothbrush or a sail in addition to other instruments like a cello, a violin, and the digital world. The composers insert musical hallucinations—such as seemingly unending scales—and transport their musical ideas from the stage into the audience’s brain, onto the inner stage. Noise becomes music and vice versa. There is healing power and experimental joy, cheerful little songs to lighten the mood and elegant abstract lines to please the sophisticated listeners. There are persistent tunes and an underlying rhythmic development that becomes the frame for the whole evening.

“MUSICOPHILIA is a fascinating music theatre work based on the book of the same title by Oliver Sacks. Sacks’ book investigates the nature of the human response to music. MUSICOPHILIA is based on nine selected case studies from this book, realized through theatrical action, music, video projection and lighting. The piece cuts between theatrical discussions or dramatizations of these cases, and musical responses to them, allowing the spectator to hear and reflect on music through the prism of the case studies.

The jury was impressed by the high standard of the four performers–an actor, a singer, and two strings musicians—in combination with a simple but highly effective harmony of set design, lighting, and video projection, as well as the riveting and enriching way in which Sacks’ philosophical treatise on music and the brain has been transformed into music theatre.”—MTN Jury 2015 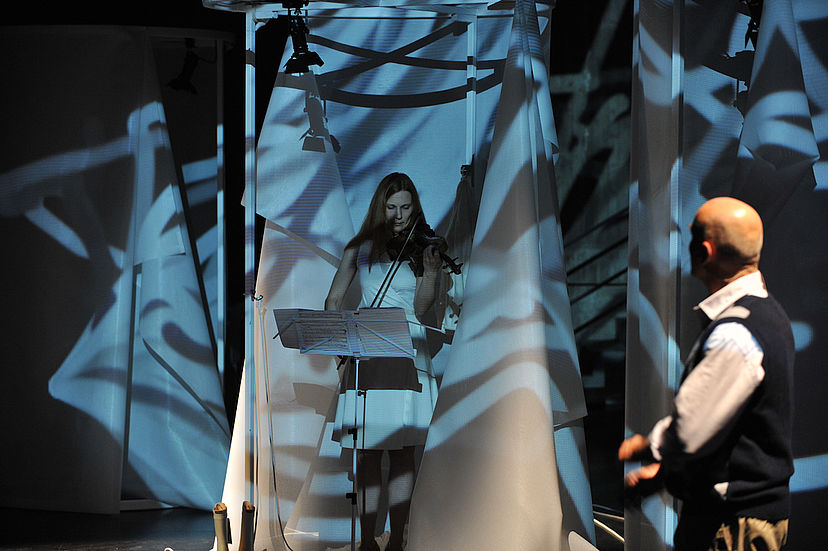 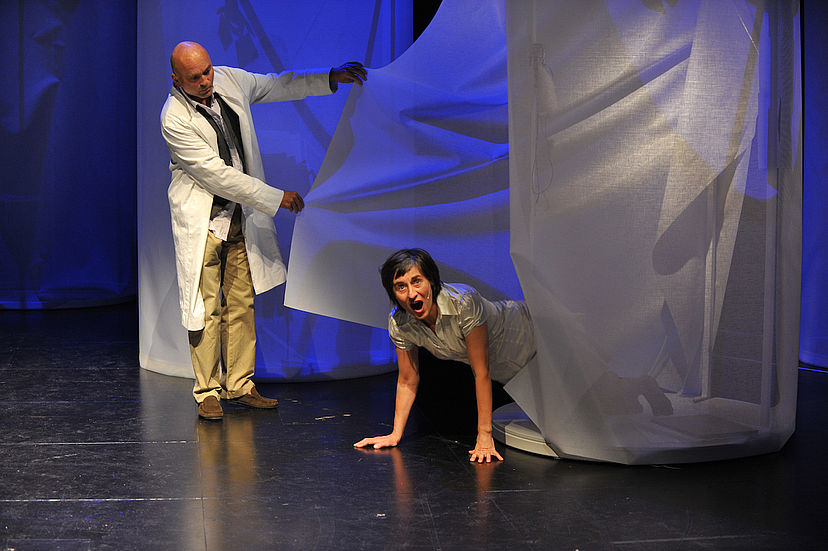 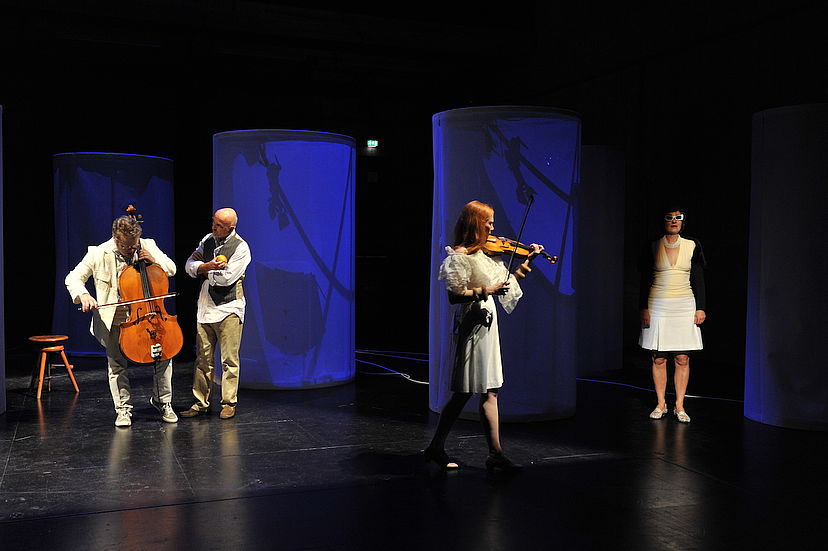