„Cachafaz“ is an example that opera is still possible nowadays. Its dramatic-musical text jeopardizes, in an absolutely contemporary way, the genre of opera.

The idea of staging an opera out of the last work of the always controversial Argentinian writer Copi is quite risky and perfectly appropriate at the same time. The original text is written in verse and set in a poor tenement house, with the neighbors acting as choir. The protagonists (Cachafaz -a decadent pimp-, la Raulito -his transvestite lover- and the corrupt policeman) stand completely apart from any traditional opera character, but, at the same time, they are built with great dramatic and musical intensity.

Each year, the Contemporary Music Festival of the Teatro San Martín in Buenos Aires presents the premiere of a contemporary Argentinian chamber opera. In this context, Oscar Strasnoy’s Cachafaz was produced in November 2012 for the sixteenth annual festival.

Cachafaz captures opera’s potential as a meaningful genre in our own time. The opera is based on the final work of the controversial Argentine author and cartoonist Copi. The protagonists—Cachafaz (a decadent pimp), la Raulito (his transvestite lover), and the corrupt policeman—stand apart from “traditional” opera characters, while at the same time they embody great dramatic and musical intensity.

is an Argentine composer, conductor and pianist. His corpus of music theater works includes twelve stage pieces and countless chamber works that have been performed in festivals and at concert halls across the globe. In 2012, the Présences Festival of Radio France organized a retrospective of his work, which included a series of fourteen concerts held at Théâtre de Châtelet. In addition to Cachafaz, Strasnoy’s Argentinian credits include his a capella opera Geschichte at the Centro de Experimentación del Teatro Colón, and the pocket opera Fabula at the Ciclo de Conciertos de Música Contemporánea. In 2014, his Requiem for a Nun premiered at the Teatro Colón, which also commissioned the piece.

received his degree in Fine Arts from the Escuela Superior de Bellas Artes Ernesto de la Cárcova and a degree in Opera Staging from the Instituto Superior de Arte del Teatro Colon. In 2008 his staging of Rossini's L’Italiana in Algeri for Buenos Aires Lírica at Teatro Avenida became a critical and popular success, and was nominated for best Opera Direction by the Argentine Critics Association. He also won the first prize at the Young Opera Competition of the Teatro Colón. Since then, he has staged more than thirty productions. Maritano also boasts an extensive teaching career in Argentina and abroad. He is a teacher at the Higher Institute of Art of Teatro Colón, as well as an appointed stage director and acting coach at the Opera Estudio in Teatro Argentino de La Plata. Since 2012, he has also served as a guest acting coach at the Schola Cantorum Basiliensis.

studied at the Instituto Superior de Arte of the Teatro Colón, where he studied with Ricardo Ortale  and Ricardo Donati. He has sung as a soloist at the Teatro Colón, Argentino de la Plata, the Opéra National de Paris (Bastille), the Théâtre Royal de la Monnaie, and the Grand Theatre of Copenhagen. He has sung leading roles in the national premieres of Cachafaz, Richter, El Matadero, Historia de Mujeres Intensas, and Jackob Lenz y La Libertad Total. He sings bass in the vocal ensemble Cabernet and is a member of the Estudio Coral de Buenos Aires. He has recorded and produced over thirty CDs with major pop and classical artists.

In 1999 González was distinguished by the President of Argentina with the National Grant for Cultural Excellence.

Diapasón Sur was founded in 2003 by Mariano Moruja as a group of vocal soloists for the premiere of the chamber opera Richter (Mario Lorenzo and Esteban Buch) at the Centro de Experimentación del Teatro Colón, Buenos Aires. The opera was performed abroad later that year at La Villette in Paris. Diapasón Sur’s formation is defined specifically for each project, and it is an alternative to the chamber group Grupo Vocal de Difusión, also founded and directed by Maestro Moruja.

studied at the Conservatorio Municipal Manuel de Falla, specializing in Choral Conducting and Guitar. He also studied at the Facultad de Bellas Artes de la Universidad de La Plata, the Robert Shaw Choral Institute, and with María del Carmen Aguilar, Carlos López Puccio and Víctor Torres. Since 1988 he has served as director of Grupo Vocal de Difusión, with which he has presented world premieres of numerous Argentine composers, as well as premieres of the most important vocal pieces in the contemporary Argentinian repertoire.

In 1995 they received the Best Contemporary Music Performance Prize at the International Marktoberdorf Choir Contest.

Moruja is a teacher at the Conservatorio Municipal Manuel de Falla, in Buenos Aires’ Dramatic Art School and at the Facultad de Bellas Artes of the University of La Plata.

Do you understand Cachafaz as a way to attack the traditional and perhaps elitist language of classical opera?

Oscar Strasnoy (OS). I am not losing any sleep with issues related to the traditional, cult, classic, elitist language. I think these are false problems linked to a dialectical-materialist fetishism of another generation. As a composer of musical spectacles (widening the perhaps narrow word "opera"), what worries me is to create a world in which the text and the sonic universe form a coherent whole. The world Copi presents in Cachafaz is a world of impoverished immigrants crammed into a tenement house in Montevideo during the first half of the twentieth century. The music should serve that purpose. In the case of a scenic composition, where text represents at least 50% of the material, the composer must leave aside any notion of purity and intervene on a very simple task: to serve a purpose that transcends him. And he must do this while trying to respect his own style, his personal identity. It is an unstable and dangerous balance, but an interesting one.

Given the marked location that language and stage have in the text, how are the musical genres from the Rio de la Plata referenced in your music?

OS. The references are straightforward and perfectly identifiable. But they are somehow hidden behind the frosted glass of my own musical conception, my personality and my professional deformation.

The text from Copi seems to ironize and redefine elements from Greek tragedy (for instance, the choir of neighbours). Are there in the composition allusions or quotations from other musical eras as well?

OS. Yes, absolutely. The reference to the Greek chorus is obvious and inevitable. Let us not forget that the Greek theater, with its choruses and , was the imaginary and idealized model of the new Florentine Opera in the early seventeenth century. Copi, who was a refined and cultured man, refers to the classical world in his works, particularly in Cachafaz. There are references to the Greek world as well as classical operas, specifically Tosca. The reference to Puccini's verism is evident, and, in addition to the rioplatense winks, I took this into account as well.

“Cachafazis a hilarious chamber opera that combines the Western operatic tradition with Latin American subjects and humour. Some of the incredible situations in the libretto could very well transpire in any of our Latin American countries.

The jury selected this work because of the quality of the music and the production. In particular, however, we found that Cachafaz represents the interest that opera still enjoys in the region from Mexico to Argentina. It is a genre that is very much alive with local subjects. Writers speak directly to their Latin-American audiences and, by extension, to a wider public. On top of all this, it is not often that we encounter a contemporary opera buffa. And this is an excellent one!”—MTN Jury 2015 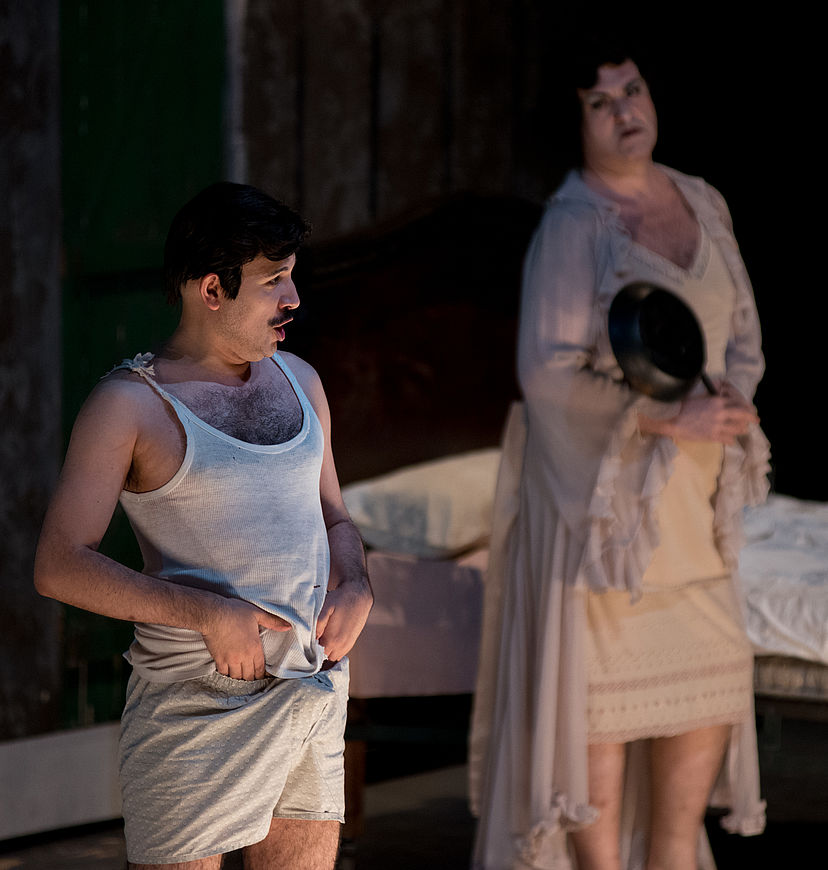 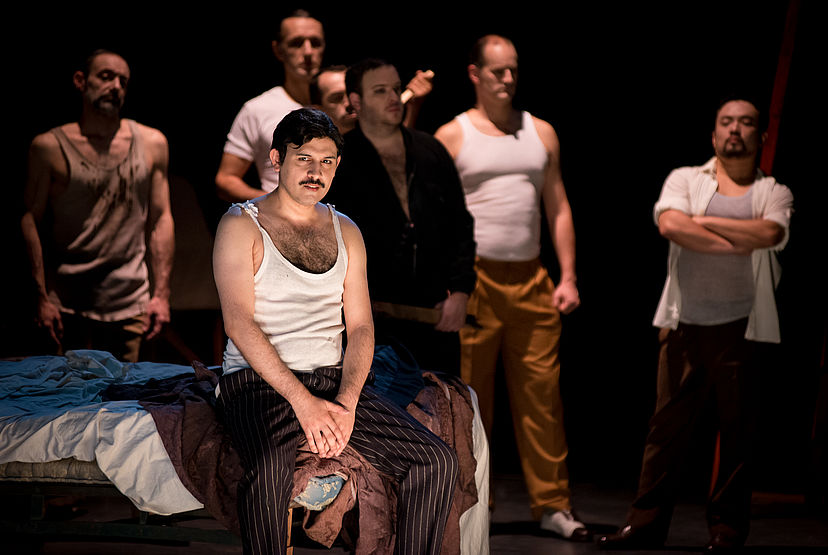 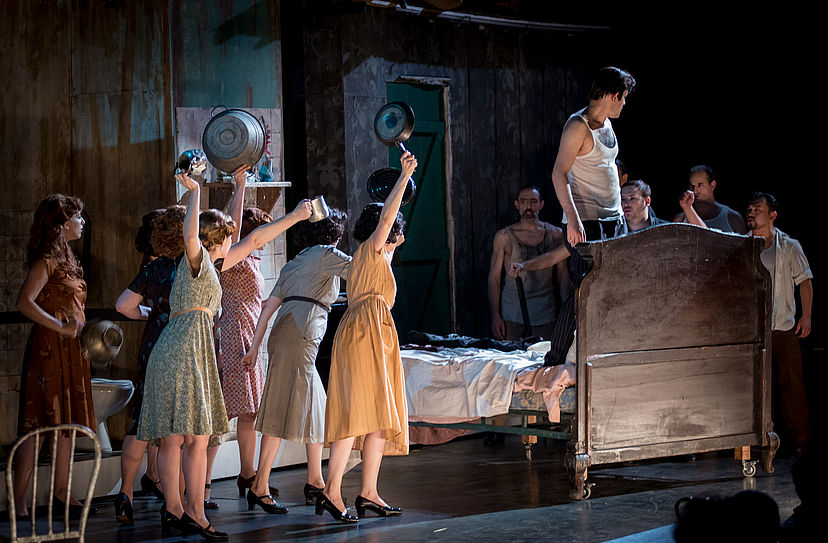 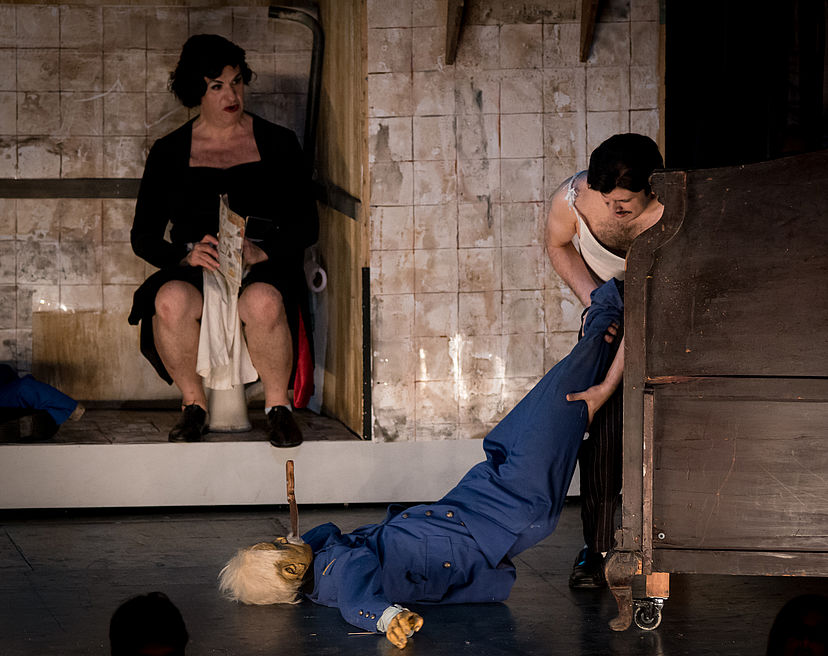