Twelve singers and an elaborate light design give a powerful visual impression of the nature of war. The audience follows the Warrior, the Spy and the Soldier through their transformation into a world of light and dark, battle and death: From man to machine, to statue, ghost and fantasy heroine - Three stories in XL of glorification and abomination.

War is as simple and as complicated as man itself. The nature of war is ever-changing, adapting to the era’s usable weapons and to the culture within which it takes place. War develops new technology, new strategies, new opinions.
War Sum Up tells of war through three main characters:
The Soldier is sent home from war. He suffers from PTSD (Post-Traumatic Stress Disorder) and no longer feels at home in civilian society. He returns to the war and dies in an explosion. A monument is raised in his memory. His fate and this phenomenon still exist today.
The Warrior is killed in battle. His unnatural death prevents his soul from a natural transition to the world on the other side. He becomes a spectre, a ghost who must tell his story in order to find peace. An old superstition which still exists in many cultures.
The Spy is captured in the war. In order to be freed she must relearn her abilities in martial arts and transform herself. She turns into a superwoman and escapes. She is a part of the fantasy-genre as well as popular culture.
All three stories are framed by the woman in yellow. She is the Gamemaster who starts the war. But she is also the person who goes on working, for everyday life must continue even though there is a war. She is part of the Civilians´ choir that intensify and expand the never-ending story of war.

Light and darkness, colour and pattern in black and white together with manga drawings in XL format form intense visual narrators.
Kirsten Dehlholm and Willie Flindt

“The man-machine interface, the new environment or computer space, which machine and man inhabit together, is not an extension of the body but a total environment. It is the context for a new corporeal reality, an entirely new world in which war is conducted, a world into which we are not only sensorially but also physically incorporated and assimilated.” (Christopher Coker from The Future of War)

Hotel Pro Forma is an international laboratory of performance and installations. Perception, perspective and themes from the world are blended into a conceptual, visual and musical art form. Each work is developed through an almost natural-science approach to study and research, and subject matter is often taken from this world-view.   War Sum Up is the result of a unique cooperation between Hotel Pro Forma, the Latvian Radio Choir and the Latvian National Opera, with Kirsten Dehlholm as director. The British symphonic pop orchestra The Irrepressibles, and Latvian composer Santa Ratniece, composed the new music, which is performed by twelve singers from the Latvian Radio Choir under its conductor Kaspars Putnins. The Danish fashion designer Henrik Vibskov created the costumes and the lighting designer Jesper Kongshaug provided the lighting with his usual contextual flair.

With a background in the visual arts, Kirsten Dehlholm (1945 - ) has worked with performance art for over 30 years. She began with Billedstofteater (Theatre of Images) from 1977 to 1984, and she founded Hotel Pro Forma in 1985.  She has created well over 100 performances, ranging from site-specific performances for museums, city halls and other architecturally significant buildings, to performances for prestigious venues around the world, including the Venice Biennale, Berliner Festspiele and Brooklyn Academy of Music.

Formed in 2002, The Irrepressibles are a ”performance pop orchestra” created by artist and composer Jamie McDermott. Described by The Sunday Times as “an enchantingly theatrical pop extravaganza”, the band attempt to bring together the worlds of classical orchestration, art, and pop music. The Irrepressibles perform a ’spectacle’ show, which brings together choreography, interactive set, lighting installation and musical performance to inspire the emotions of the ”inner child” of their audiences.

The Latvian composer Santa Ratniece is considered by many to be one of the most promising young composers in the Baltic region today. She has won several prizes for her work and participated in numerous festivals around the world.

Gilbert Nouno is a composer, teacher, recording sound artist and a researcher at Ircam. He was awarded the Villa Medicis Roma grant in 2010/2011 and the Villa Kujoyama Kyoto grant in 2007. His recent compositional projects include commissions by the Hateyva Contemporary Music Festival in Tel Aviv. He holds a Masters and PhD degree in Acoustics and Signal-Processing applied to mMusic from Ircam and the University of Paris.

Founded in 1940 the Latvian Radio Choir is considered to be one of the most boldly-innovative choirs in Europe today. Their vast repertoire extends from early Renaissance and Baroque music to complex works of contemporary classical music.

Kaspars Putnins  is a staunch supporter of new vocal music. For his choir, this means performing challenging and still-developing music that often leads into unexplored territory. He has collaborated with various Baltic composers to develop works with a new musical language and expression. He has initiated several music theatre productions that often incorporate the Latvian Radio Choir as well as visual artists.

War Sum Up is inspired by the powerful expression of Japanese poetry, pop music, precision and brutality. The libretto is created with texts from Noh-theatre and written by Japanese masters. The old world meets the new  as the deep tone of poetry unfolds in an electronic musical universe. Several different musical expressions and styles combine together. Together with the sung voices, newly- composed classical music creates a spheric, electronic sound. Specially-composed pop music describes the three main characters in a mix of chamber pop and electronica where man and machine melt together. It all blends into a fusion of painful beauty.

"I was chosen to make pop. Pop is not specific in genre terms and has a line all the way back to folk-music, everything from a melody in a music box to instruments that represent country music, to the style of music that one might associate with manga culture."
(Jamie McDermott, composer)

"Another dimension of the sound is created by electronics: it is like another acoustic universe with varying sound sources. Electronic sound space is used as a self-contained musical instrument. The electronics are made so exquisite as to create a sense of inner voices, audible  only to the internal mind."
(Santa Ratniece, composer) 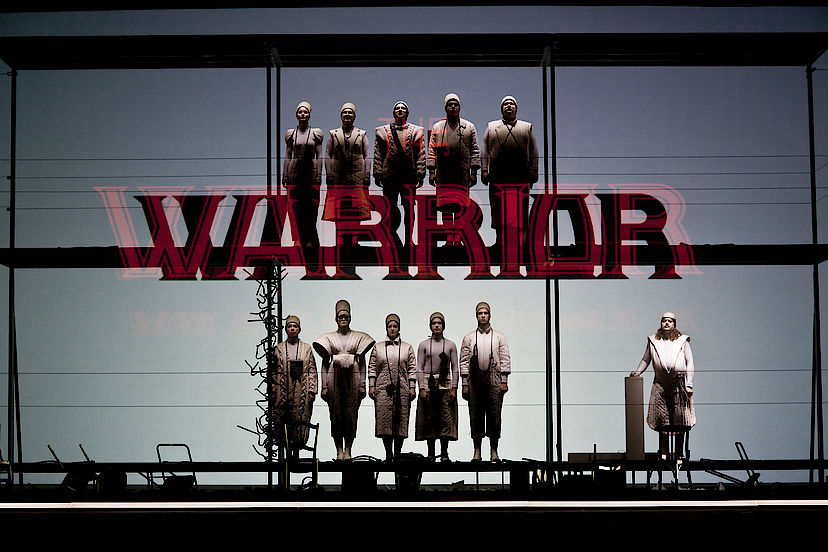 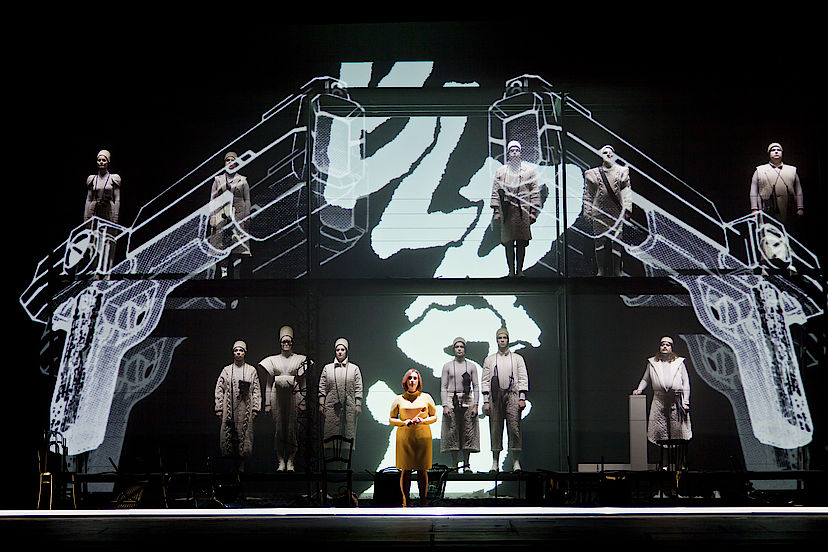 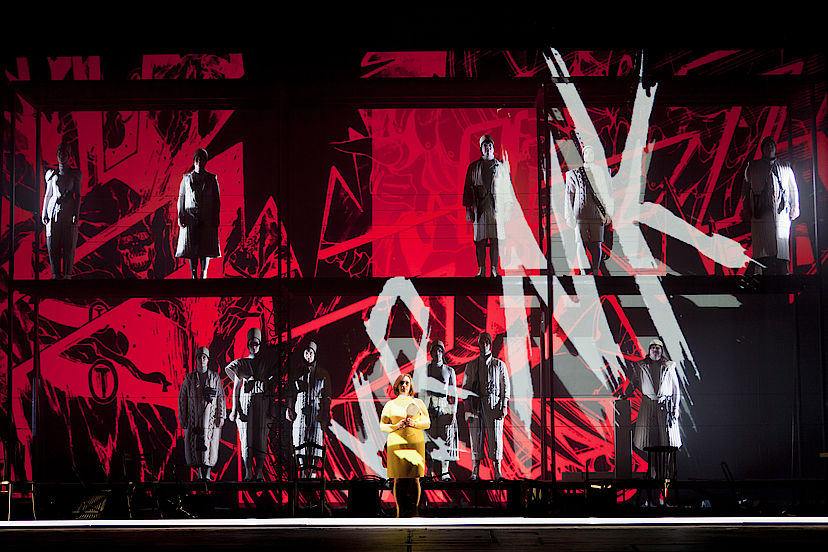