On film we see an elderly woman wandering across a stage devoid of musicians, while soloist Sol Gabetta performs live to one side: the music (and movement in moments) sometimes separate, sometimes interacting with the film. Gabetta tackles the score and its often riveting urgency with a drama that becomes as much physical as musical, an effect enhanced by her integration into the direction of the entire piece. It is a striking visual effect that lingers longest: Gabetta leaping up, propelled forward, in unison with the actor on screen.

In Michel van der Aa’s cello concerto Up-close, the traditional interaction of soloist and ensemble is reflected by a mysterious, mirror reality seen on film. When the piece begins, a solo cellist and string ensemble sit on the right of the stage; on the left stands a large video screen. On the screen we see an elderly lady sitting among an arrangement of chairs and music stands that parallels the real-life version on the other side of the stage. It soon becomes clear that this is only one of a variety of interactions across a hall of mirrors created by the soloist, ensemble and film.

Up-close, commissioned by the European Concert Hall Organization and featuring the Argentinean cellist Sol Gabetta and Amsterdam Sinfonietta, is thus a cello concerto duplicated and magnified until it reaches the boundary of video opera. Are the elderly woman and the cellist playing out the same role? The film is seen in excerpts ‘inserted’ into the music, so is the music driving the film, or the film the music? The music never ‘narrates’ the film, but somehow the two layers seem to extend one another around a common subject. Furthermore, the live instruments are augmented with an electronic soundtrack, which at times seems closely related to their music and at others appears to derive from the ‘concrete’ sounds of the action on screen. Are these plural realities or versions of a single experience?

Much is left unexplained and the course of the piece, including a striking coup de théâtre towards the end, provides no easy answers. One theme that does emerge, however, concerns loneliness. As in other Van der Aa pieces – such as the video opera One or the ensemble piece Mask – elements of an uncanny, inscrutable ceremony are never far away and in Up-close these become part of the difficult ritual of human to human contact.

Visual references recall the methods of the Dutch Resistance of World War II, but it is the spirit of secrecy, protocol and adversity that pervades, rather than any specific historical setting. The woman is apparently trying to transmit coded messages of some sort and, at one of the work’s climaxes, she employs a large mechanical decoding device built especially for this piece by the composer. As it decodes the woman’s messages, the machine creates music of its own. This intertwines with the sounds of the ensemble, a singular moment when film and music cross over into each other’s realms. If anything we are left with more mystery, not less.
(Tim Rutherford-Johnson)

Michel van der Aa (Netherlands) is a composer, film and stage director as well as a script writer. Before studying composition (with Diderik Wagenaar, Gilius van Bergeijk and Louis Andriessen), Van der Aa trained first as a recording engineer at the Royal Conservatory in The Hague. Many of his works are as visual as they are aural.  An important aspect of Van der Aa’s work is collaboration and interdisciplinarity. He has worked with leading classical performers such as Sol Gabetta, Barbara Hannigan as well as the Portuguese fado singer Ana Moura and well-known European actors like Klaus Maria Brandauer and João Reis. He has directed both the filmed and staged elements of all of his works. His operas have been staged in more than a dozen countries.

The cellist Sol Gabetta was born in Cordoba, Argentina, in 1981. She was only ten when she won her first competition in Argentina, and has received many more awards since then. From 1992–94 Sol Gabetta studied at the Escuela Superior de Musica Reina Sofia in Madrid, after which she moved to Switzerland to pursue further studies with Ivan Monighetti at the Basel Academy of Music. After further years of study with David Geringas, she took her concert exam in 2006 at the Hanns Eisler Musikhochschule in Berlin. Over the past few years, Sol Gabetta has made guest appearances with the Munich Philharmonic and the Vienna Symphony Orchestra, amongst others. Ms. Gabetta regularly appears at major festivals such as the Rheingau Music Festival in Verbier or at the Menuhin Festival in Gstaad. She has also founded her own chamber music festival in Switzerland entitled ‘Solsberg’.

Candida Thompson studied with David Takeno at the Guildhall School of Music and Drama. She developed her studies further at the Banff Centre for the Arts in Canada and played with several international orchestras such as Moscow Chamber Orchestra, The English String Orchestra and Amsterdam Sinfonietta. Since the summer of 2003, Candida Thompson is Amsterdam Sinfonietta's artistic director and leader.

The ensemble consists of 23 chamber musicians and its repertoire covers a variety of styles, extending from the Baroque repertoire to contemporary works. The main focus lies on string ensemble repertoire, including chamber music performed in string orchestra format. On occasion Amsterdam Sinfonietta performs as a chamber orchestra with the use of additional instrumentalists. The ensemble is characterised by an innovative approach to repertoire, often presenting unexpected and exciting programming combinations. Alongside performances of mainstream repertoire, Sinfonietta frequently draws attention to unjustly neglected or new works.

As a cello concerto it gives me the opportunity to display a whole spectrum of technical virtuosity and expressiveness. But even at a purely musical level there is a technical aspect – the playback – that, based on conventionally produced sounds, introduces a new level that is not an accessory, but rather a dialogue partner.

The principle of the dialogue is then further developed by means of the film level in which I, as the soloist, suddenly become part of the drama that, without a concrete plot, leaves room for reflections in the most varied directions. Just as the musical playback already reflects the sounds and places them in new contexts, the images of the film also open up an entirely new perspective of the performance in which the orchestra and I, as a musician, do not merely bring to life the notes of a score, but rather we all become a part of a mystical action. And thus I am no longer just a cellist, but also perform very much as an actress in the room, whereby my actions are mirrored by the elder woman in the film. Or is it actually I, who mirrors the woman in the film? In any case, I am no longer just the musical soloist here, but simultaneously also the protagonist on the stage, an experience that was an absolutely new and awe-inspiring one. 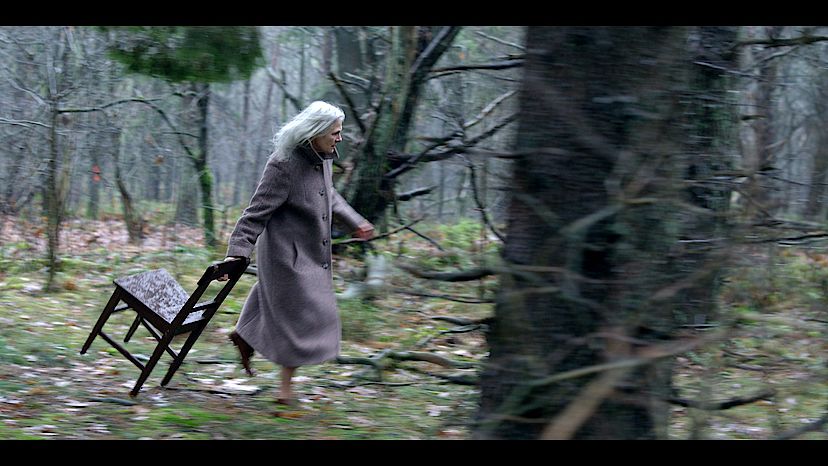 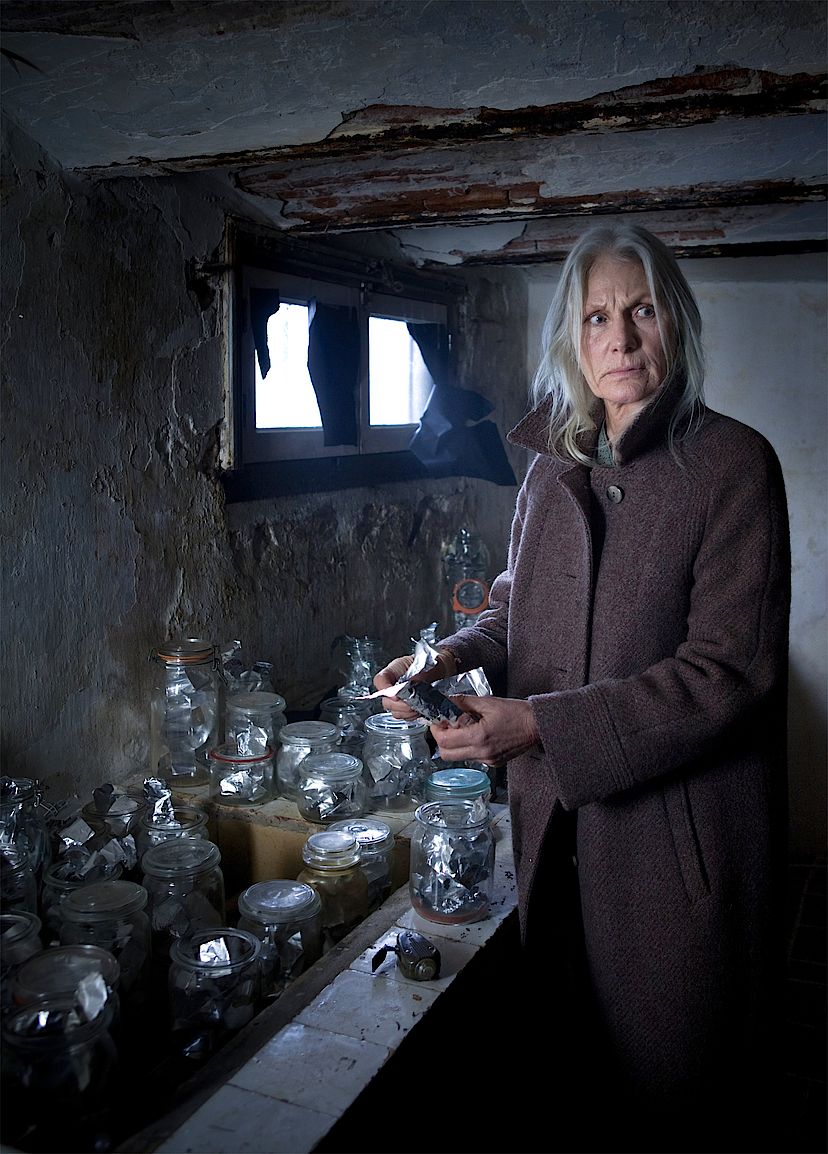 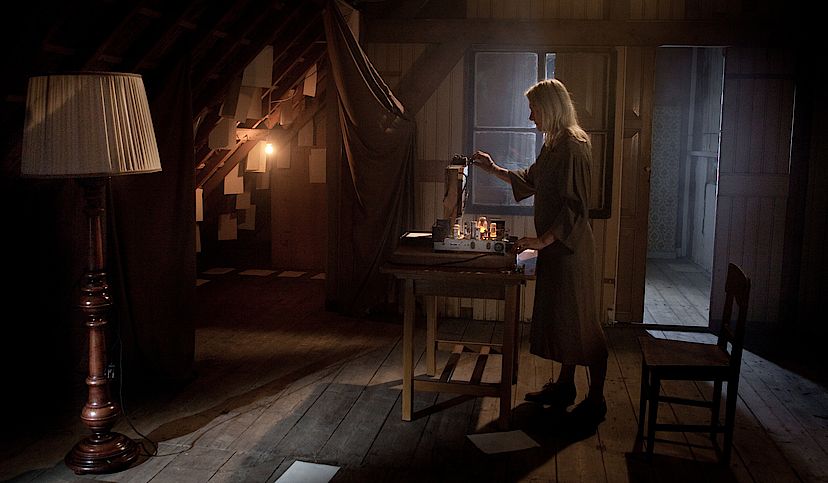