The nuclear accident that took place in Three Mile Island 30 years ago has largely been forgotten. On the morning of the 28th March 1979 one of the reactors in the nuclear power plant began to heat up because of a faulty cooling system. Between 5 in the morning and 8 in the evening a radioactive cloud reached the houses and the fields around Harrisburg. Many journalists have investigated this affair. One of the key figures was Ignaz Vergeiner, an Austrian meteorologist commissioned by the families of the victims to write a report about the pollution levels that had been reached. Vergeiner’s research, leaves no doubt. The radioactive cloud travelled much further than the authorities admitted. Vergeiner's premature death put a halt to his efforts. However, in the weeks before he passed away, the scientist revealed the details in a filmed interview with his friend Karl Hoffmann. Most of the data that Vergeiner collected refer to wind speed, low and high air pressure, the movement of air currents. For that reason ‘air’ is the protagonist in this theatre production. Reactors, maps, documents, diagrams, calculations, landscapes, measuring instruments, conducting wires, pipes, cables etc. are on show. An interactive installation – the “Cloud” - reacts with the performers and with the voice and face of Vergeiner, the testimonies of the survivors and the interviews with family members of the nuclear accident victims filmed on location. The audiovisual materials are counterpointed by the Neue Vocalsolisten Stuttgart; The instrumental part, performed by the Klangforum Wien, is also organically involved in this dialogue and with the help of amplified percussions, wind and string instruments adds meaning, lightness and expression to the element ‘air’.

Three Mile Island is not the reconstruction of a forgotten catastrophe, nor is it an account of the nightmare that for the first time in recent history shook confidence in the progressive propagation of nuclear energy. It is, or at least aims to be, purely the story of a scientist and his human, ethical and scientific experiences.

The case of Ignaz Vergeiner, the true heart of our work, represents in our view a general paradigm that does not exclusively concern those events in Pennsylvania. In our eyes, the parable of Ignaz is the story of a conflict with science on one side and power on the other. On one side a solitary man, a scientist who collects safe, reliable, unmistakable data, on the other a lobby, or several lobbies, defending their own economic, political and legal interests and questioning the value of scientific research. Ignaz unmistakably proves that the radiation levels to which men, women, children, animals, meadows, woods and plantations were exposed between 28 and 31 March 1979 were much higher than the authorities admitted. The principal element of our representation (it could not have been otherwise) is therefore authentic testimony from those who experienced the tragedy first hand. Together with this, we show some of the faces of the accident victims whom we met in Pennsylvania last autumn. The only element of ‘fiction’ is a narrating voice entrusted to the figure of Sky Woman, a myth closely connected to the culture of the Iroquois Indians, the legitimate inhabitants of Pennsylvania before they were exterminated by English settlers.

Despite appearances, Three Mile Island is neither an indictment against the use of nuclear power plants, nor a warning about the hidden risks of using nuclear energy for civilian purposes. What we are recounting is the parable of a scientist who, thanks to his perseverance, his rigour and his research methodology, manages to establish a simple and incontestable truth. He fights to ensure that truth is acknowledged, but death keeps him from pursuing his battle. We wanted simply to document his heritage and transform it into a performance. We could have chosen to write a biography or a scientific paper, or made a film or documentary. Instead we chose the most complex route, the only one we know: we have  put Ignaz’ existential and ethical parable on stage using the apparently classical instruments of music theatre, namely music, song, projection and narration. It is not our duty to judge the final result. We do not even know what name we will give to this creature we have brought to life. What is Three Mile Island? An opera, a concert, a story in sound and image, a multimedia project (to use horrible modern terminology)? This uncertainty, this doubt, forms part of the same material of which our ‘show’ is made: a question mark, that which must necessarily end any authentic, honest and free testimony.
(Guido Barbieri)

Almost three years ago Guido Barbieri came to my dressing room after a concert to to greet me. We had already met before and initiated a promising dialogue. Before taking his leave Guido said to me, “I leave you with three words: three, mile, island. Try to put them together and let me know what you think.” At that time I had only a vague idea of what these three words meant. I remembered an accident at a US nuclear plant some years ago, yet – like so many others – I knew neither the details nor the consequences or implications of that event. A couple of weeks later Guido called me and asked, “So, did you put those three words together?” We met again in Venice and Guido told me about Ignaz Vergeiner, about Karl Hoffmann (“a very talented journalist friend of mine”), about a car journey at night from Palermo to Catania whilst he was working on another project. Even before the encounter, I knew that I would accept Guido’s proposal.

A few weeks later, Karl sent me a first section of the long and complex filmed interview with Ignaz Vergeiner that would form the basis of the project. Examining the footage, I was overwhelmed by the lightness of Ignaz’ personality, by his delicacy, his vivacity. Ignaz did not just use air and wind to read the truth; it was as if he himself was made out of air. What convinced me above all else to accept the challenge of Three Mile Island was the feeling that it would be possible to create an indispensable, strong and vital relation between the libretto of the opera – that was still to come into existence – and the context that had generated it. We would take Ignaz’s heritage and transform it into music, into words and into images, ensuring that it reached ears that would otherwise never have  heard it. The aesthetic and artistic qualities of what we possessed – Ignaz, the air, the wind, lightness, delicacy – convinced me that the challenge of giving an artistic shape to this story rather than a traditionally journalistic one really had a chance of success. After two years of study, of analysis and of preparation (my correspondence with Guido and Karl now exceeds one thousand emails!) I once again met up with my companions. Together we set out for Pennsylvania, to Harrisburg, to that Three Mile Island in the middle of the Susquehanna River. And together we met Marjorie, Paula, Ann, Mary, James, Joyce, Kay and Robert: victims and witnesses of the accident. After thirty years, their memory is still alive, their willingness to tell the truth is still intact.
(Andrea Molino)

The source material for Three Mile Island was a long in-depth video interview that Karl Hoffmann did with Ignaz Vergeiner before he died. First and foremost, this meant for me that the core of the work had to be his voice. So, Ignaz is the source of the musical discourse as well as the central figure of the narration.
[...]
The sound of his voice, his inflections, accents, pauses, even the smallest details that had no semantic meaning but great emotional value, become the core around which the musical discourse revolves. The voices of the Neue Vocalsolisten and the instruments of the Klangforum accompany it, in the most humane sense of the word, delicately and respectfully. As I have done previously in other works, I gave Ignaz’ voice an instrumental alter ego, the double bass in this case. Then I did the same with the saxophone for the voice of US scientist Arnie Gundersen. We interviewed him during our research trip to the US and he appears extensively in the narration.
The other key element is air, the medium used by Ignaz to develop his contribution to truth. Of course I did not imitate the sound of air with vocal or instrumental writing, even though some onomatopoeias may surface in the musical discourse from time to time. Instead my game was to create a musical reality, a world of sounds with no symbolic or metaphorical references, but with the same fascinating characteristics of air: lightness, delicacy, subtlety, impalpability.
(Andrea Molino) 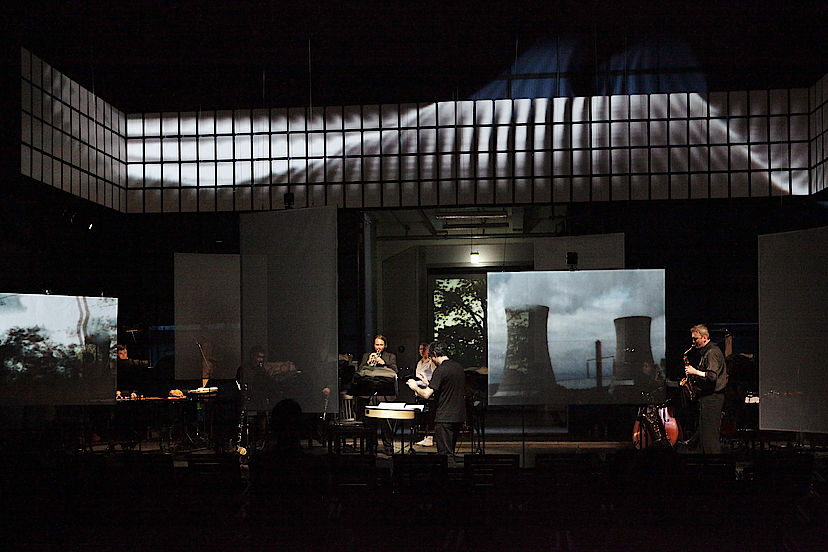 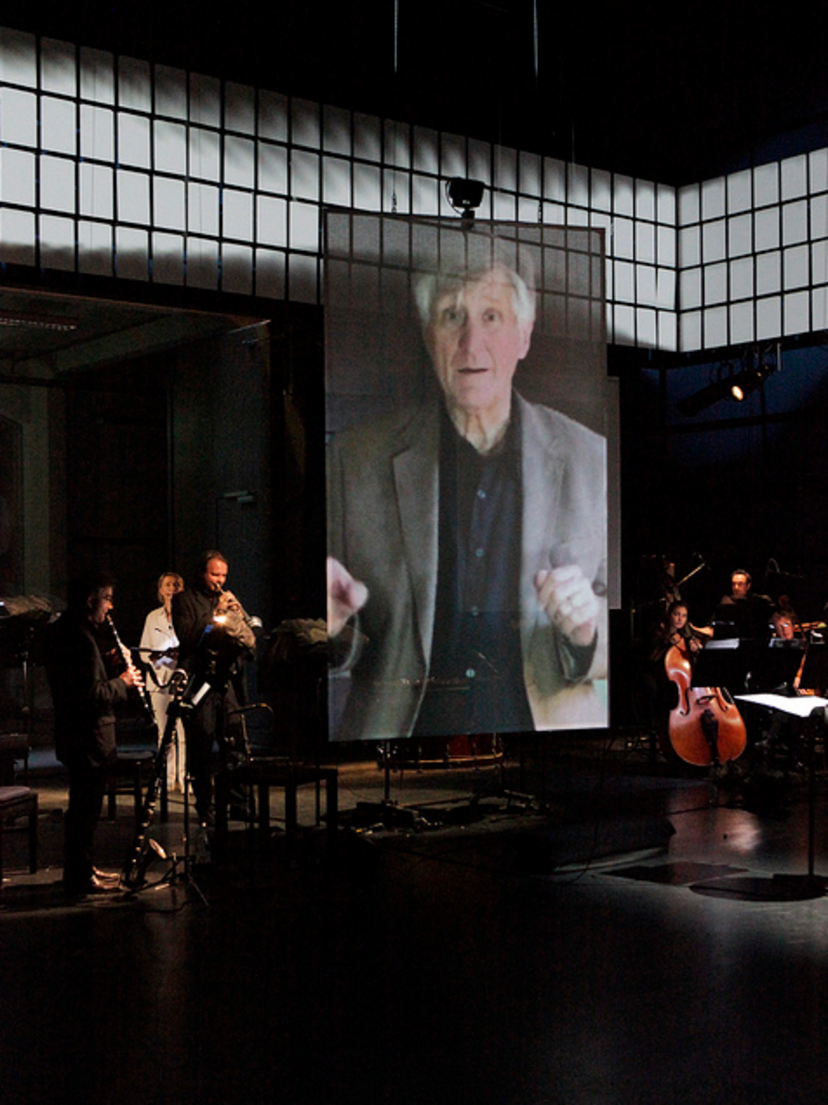