Thanks to My Eyes

Thanks to my Eyes is the fruit of the collaboration between the Swiss Italian composer Oscar Bianchi and novelist and stage director Joël Pommerat. Bianchis first opera deals with the question of the stormy relationship  between a father – the biggest comic artist of his time – and his only son, Aymar, who is incapable of meeting his father’s stifling demand to succeed him on stage. Forced to fit the paternal mould, the young man only finds comfort with a strange and timid woman, during dangerous and liberating nights away from the closed family setting.

Aymar is the son of a very old woman who feels useless and of the biggest funny artist of the world.
The father would like to pass on his art, and Aymar would really like to have them proud of him. But well, Aymar is not made for the laughter and captivates on the contrary by its sick sensibility. Every night he meets a strangely shy young woman who attracts him. What guilt when he should be himself completely in the service of the paternal dream!

“It seemed to me that Joël Pommerat’s text, which is perfectly appropriated to his intentionally more prosaic than poetic theatre, would find a musical expression more in tone with opera through the sounds of the English language. By which I don’t mean the refined British language, but a “middle earth” English, a neutral international interaction. I also wanted to create a real break between the original work and the opera, yet without changing the story in any way. By using English words, having in mind their specific sonic component, very different than the French one, I could keep the sense of the text, yet at the same time radically transform its sound. Last, - and this is the most important for me  – I was keen for the poetic experience of the theatrical performance, as Joël Pommerat conceives it (the text as a pretext) to be supported by the music. Make the spectator/auditor live an “other” kind of experience, deeper, more personal, that is what I wish as a composer.”

“I had told myself that I would not write a classical opera. A priori it is something I am not attracted to. Neither in theatre, for that matter. I would never perform “stock pieces”. It is not my way into theatre, which is actually linked to the notions of creation, imagination and the search of forms. It was evident I would not become an “opera director”. As much as I am not interested in becoming a “theatre director”. Antoine Gindt first approached me with a creation project. Above all, with a project that could include theatre. The first discussions with Antoine were about the possibility that there would really be a theatricality to it, similar to the one I practice. (…) And then the idea came quite quickly that I would work on my writing. I had told myself that, if one day I would approach opera, it would be because I could approach it as I do in theatre: as an author. And, of course, with the essential collaboration of another partner, the composer, who doesn’t exist in theatre.”

Oscar Bianchi pursued his studies at the Giuseppe Verdi Conservatory in Milan and at Columbia University in New York. He notably received the Gaudeamus pri- ze in 2005. In 2007 Oscar Bianchi wrote his MATRA cantata, currently edited under the label Cyprès. Together with the Orchestre Philharmonique de Radio France, he composed Anja Concerto at the Musica Festival in Strasburg in 2010. He wrote his first string quartet in 2011 with the Quatuor Diotima at the Hud- dersfield Festival. Among his projects, his collaborations with the Gewandhaus Orchestra in Leipzig and the conductor Riccardo Chailly, the Bavarian Radio Symphony Orchestra, and the Ensemble Modern should particularly be mentioned.

In 1990 Franck Ollu became the lead horn player in the Ensemble Modern (Frankfurt), of which he is now one of the regular conductors. Since 2003 he is artistic director of the Kammaren- sembleN of Stockholm. Over the course of his career, he has directed amongst others the Ensemble Recherche and Musikfabrik (Germany), the Asko Ensem- ble (Netherlands), as well as numerous symphonic orchestra at an international level. He conducts works of various composers, including, with the Ensem- ble Modern, Landschaft mit entfernten Verwandten (Heiner Goebbels), ... Ce qui arrive ... (Olga Neuwirth), Passion (Pascal Dusapin). Furthermore he regularly performs at national and international festivals.

Joël Pommerat (1963) is a playwright and a stage director. He founded the Louis Brouillard company in 1990, whose activity and reputation has grown considerab- ly since the success of Au monde in 2004. From March 2007 to the spring 2010 Pommerat was artist-in-residence at the Bouffes du Nord theatre in Paris, associate to Peter Brook. Since 2012, he is associate artist at the Odéon – Théâtre de l’Europe in Paris. In April 2011 Joël Pommerat received the Molière Award for playwrights for Ma Chambre froide. The Compagnie Joël Pommerat-Louis Brouillard received the Molière Award for the company.

After studying interior architecture at the École Boulle, Éric Soyer came to theatre via the English-speaking company ACT, who introduced him to the technicalities of staging. Among others, he has done the lighting design for the Partage de Midi by Paul Claudel (2007, Comédie Française), for The Scream (Le Cri, 2008, for the choreographer Nacera Belaza) and for Les Sentinelles (2009, Nacera Belaza). Eric Soyer has been in charge of scenography and lighting for Joël Pommerat for the past 12 years. In 2007 he received the prize of best set design from the trade association of Theatre, Dance and Music critis for his set designs and lighting of the Marchands. He was nominated for the Molières for his lighting design in 2008 for Je tremble, in 2009 for Canard sauvage, in 2010 for Cercles/Fictions and in 2011 for Ma chambre froide.

After studying fashion design in Rennes, Isabelle Deffin trained as a costumier at the school of the Théâtre National de Bretagne. Isabelle Deffin works as creator and designer for theatre as well as for dance. She worked as a wardrobe designer for cinema, among others on the medium-length films of Jean-Claude Monod and Jean- Christophe Valtat, which were awarded prizes at the Clermont-Ferrand festival in 2003. Furthermore she works as assistant on many of the performances written and staged by Joël Pommerat.

In the 1990s, Dominique Bataille was sound engineer at the Grande Halle de la Villette in Paris. He worked with theatre and stage directors such as Jean-Pierre Vincent, Patrice Chéreau and Jean-Louis Martinelli. He also collaborated with several composers: Pascal Dusapin for the operas To be Sung and Medea Material, François Sarhan for Kyrielle du sentiment des choses, James Dillon for Philomela, and finally Wolfgang Mitterer for Massacre in 2010. In 2010, Dominique Bataille’s recording of Philomela received the Orphée d’Or Award for best recording of 21st century lyrical music from the Académie du Disque Lyrique.

How do you deal with the vocal strength of each individual character?
By respecting the rules of the opera’s conventions, which force one to take in consideration while writing the sake of the text’s clarity, and to give each character the most appropriated vocal colour according to his role. The role of Aymar who is not yet a man psychologically, will be sung by a Countertenor. The vocal range’s ambiguity of this so special voice seems to me as a perfectly appropriate fit to the character’s profile. There is in Aymar a beauty of the naivety that the Countertenor voice is particularly able to reveal. The role of the Father, whose career as the greatest comedy artist in the world is more than doubtful, will naturally go to a Baritone, - the cliché voice of the impostor in opera. The two Young Ladies will be two Sopranos, one lighter and clearer than the other. Nonetheless, the exhaustion and the weakness of the Mother, facing the end of her life, brought me to give her role to a comedian rather than to a singer. The physical energy necessary to sing seems indeed incompatible with the expression of this weakness – notwithstanding the countless romantic heroines who die with all the strength of their vocal resources…
(Oscar Bianchi in an interview with Christine Prost) 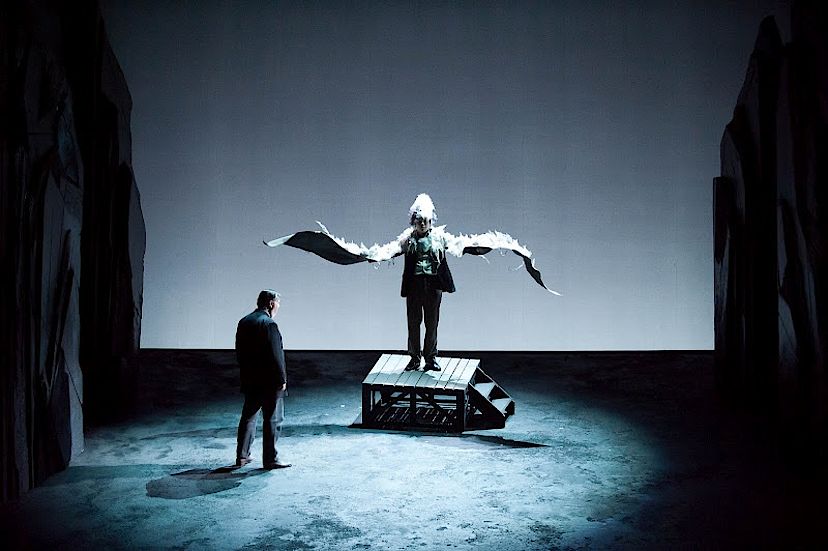 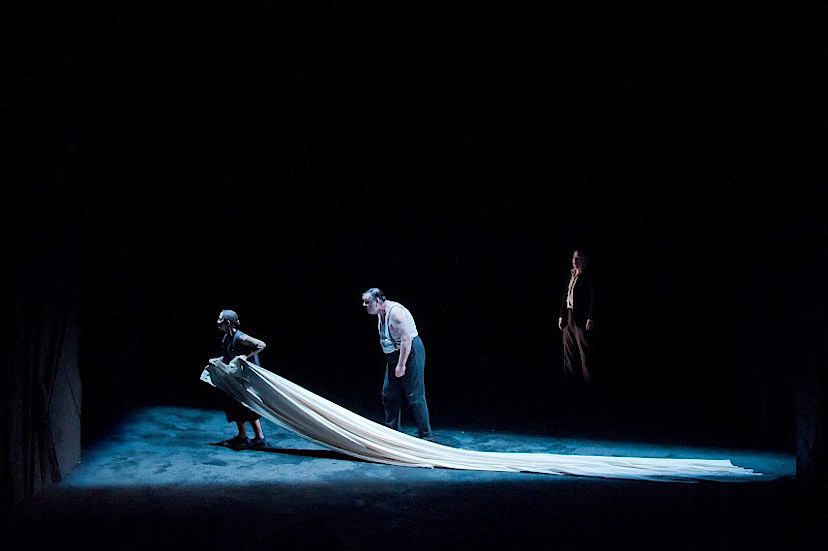 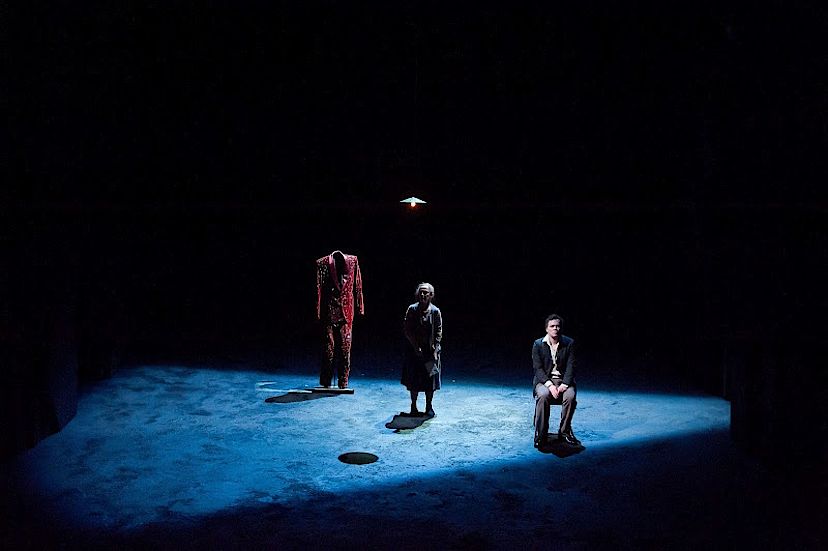