What’s it about? Eddie Dickens`s parents suddenly turn “strangely yellow and crinkly around the edges”. Therefore they arrange for him to be picked up by his `”Mad Uncle Jack” and “Even Madder Aunt Maud”, who drive with Eddie in a large coach to their house called “Awful End” on top of everything. Philip Ardagh’s educational views are pretty black, the world of adults is a nightmare, the director of the orphanage is cruel and indescribable and the stuffed weasel Malcolm is really called Sally – or was it the other way round? Eddie does not let himself be intimidated; together with his unpredictable aunt he defeats the bearded stranger, and in the role of a poor orphan boy he becomes the glamorous hero of the St. Horrid’s Home for Grateful Orphans.

What’s it all about? Eddie Dickens’ parents suddenly look strangely “yellow and crinkly around the edges”. That’s why they have him fetched by his “Mad Uncle Jack” and “even Madder Aunt Maud”, who drive him in a large carriage to their house called “Awful End” of all things. Philip Ardagh’s education theory is pitch black, the adult world is a nightmare, the director of the orphanage is a horrid and unspeakable woman, and Malcom the stuffed weasel is actually called Sally, or was it the reverse? Eddie lets nothing intimidate him; he conquers the bearded man with his unpredictable aunt and, in the role of an impoverished orphan boy, becomes the glamorous hero of St. Horrid’s House for Grateful Orphans.

For Eddie Dickens the world of adults is totally unpredictable, latently cruel and always good for unexpected turnarounds. But he never gives up, and tries each time to fight his way through every adventure according to the new rules of the game.

Philip Ardargh turns the ‘children’s world’ upside down: nothing is the way the children imagined it would be according to their parents and teachers. To enjoy a book, readers must be able to free themselves from their well-practiced thought structures and have a passion for developing creative thinking. In this way, taking in the novel becomes a school for creativity and free thought, the precondition to discovery new worlds.

With “Awful End” we have to distance ourselves from the idea of transposing everything identically. Yet how do you portray the surreal? Ideally, we should be confronted with a staging with puppets that combine human with superhuman abilities. In the adults’ insanity Eddie Dickens is the only one who is “normal”, and he is a one-meter-tall puppet.

“Awful End” defies every category. In Frank Schulz’s production everything can become everything: musicians become actors, puppeteers become singers, and the harpsichordist a horse. Yet this production cannot be assigned a customary, generic name: even though the music is the defining entity, “Awful End” is not a children’s opera, nor is it a drama with musical inserts, certainly not a musical, and the term musical comedy doesn’t quite fit.

Since its founding in 1984, Theater Kontra-Punkt thinks of itself as being, in the broadest sense, a music theatre for adults, children, and young people. In our productions we work with both classical and early music, but most of all with contemporary music.
We initiate music theatre experiments, searching for unusual combinations of the arts and multidisciplinary theatre experiences. Our pieces are created in collaboration with musicians, singers, actors, and dancers. Our main focus lies in the realization of world premieres.

We deal intensively with the possibilities of production locations: theatre as installation (as, for example, the Rhine Bank Tunnel in Düsseldorf, Ulrich Rückreim’s sculpture exhibition, warehouses, etc.) and space as a resonating instrument.
Another speciality is developing new concepts for family concerts. Together with large, national and international orchestras we develop programmes meant to acquaint children and families with orchestra music in playfully intelligent ways. We think of family concerts as an independent art form, which aspires to make music more theatrical, to bring professionals and amateurs (children) together, and to forge a path to contemporary music.

The production partners come from all throughout the German-language region. In 2011, the successful Orchestra Olympics project was invited to Taiwan and enjoyed its first staging in Mandarin Chinese.
The last two young people’s projects with contemporary music, “Die Odyssee – akustische Turbulenzen für Stimmbänder und Instrumente” (The Odyssey – acoustic turbulence for vocal chords and instruments) as well as “Tanz der Maschinen” (Dance of the Machines), received the NRW’s broadcasting network’s Kultur pragt prize. In addition, a subsequent production received the cultural prize of the federally-funded MIXED UP Awards.

Using our ‘independent professional theatre’ method, the pieces are created in collaboration with the composer, and with respect to the special artistic abilities of the participants. Hauke Berheide has long accompanied the rehearsal process and, for example, a musician’s musical part is exactly tailored to his abilities, accordion and trombone playing.

The world is insane. Its rules constantly change, and neither human relationships nor the laws of nature can be depended on. What used to be right is now wrong – and the reverse. And we, therefore Eddie Dickens, have nothing to oppose the unpredictable chaos of reality with. Or almost nothing. Except our fantasy. From everyday objects separated from their original purpose – tin cans, air pumps, Styrofoam plates and small percussion objects; a harpsichord, accordion and brass instruments – we obtain the figures of musical characterizations, which Eddie Dickens listens to, trying to get a general view of his world. He alone is the “sensible” one, who seems to speak normally. All the others sound strange and are dressed in musical tones: the orphanage director is a euphonium coupled with a vocal ensemble, the circus director sings operatically to harpsichord accompaniment, the police officer rattles like a tin man with every step he takes, and the horse is a harpsichord, a clock…Songlike passages change places with slapstick-like recitatives and purely instrumental music. The music wins with reduced means, and with it, for Eddie Dickens, a reality in which he orients himself in the awful end. Eddie’s world is made of tones. And these tones have the exact meaning that Eddie, therefore we, can gain by playing them. 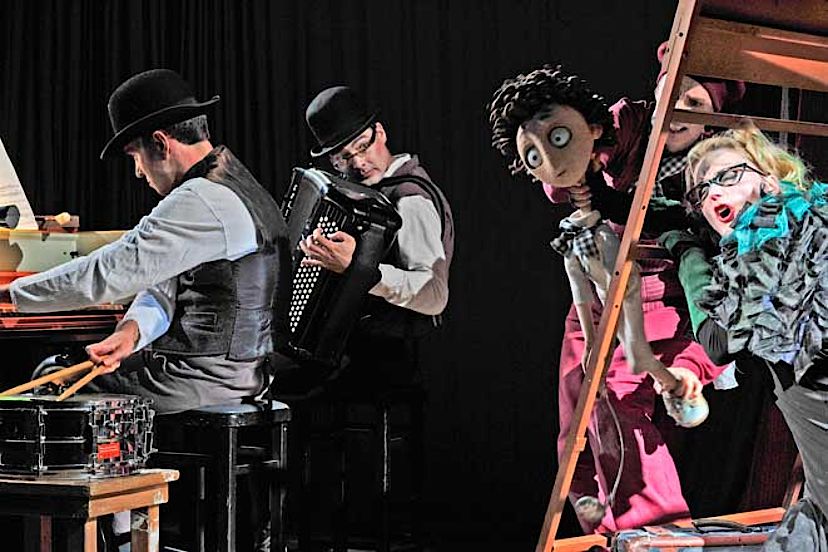 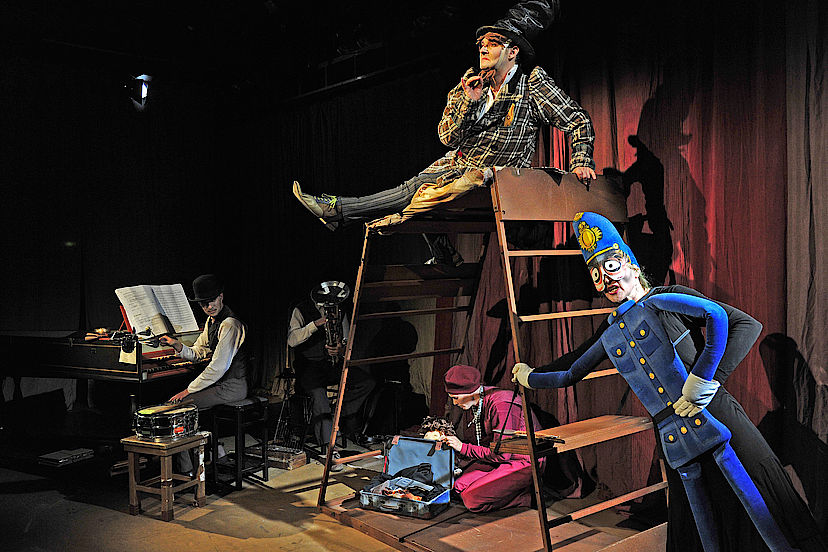 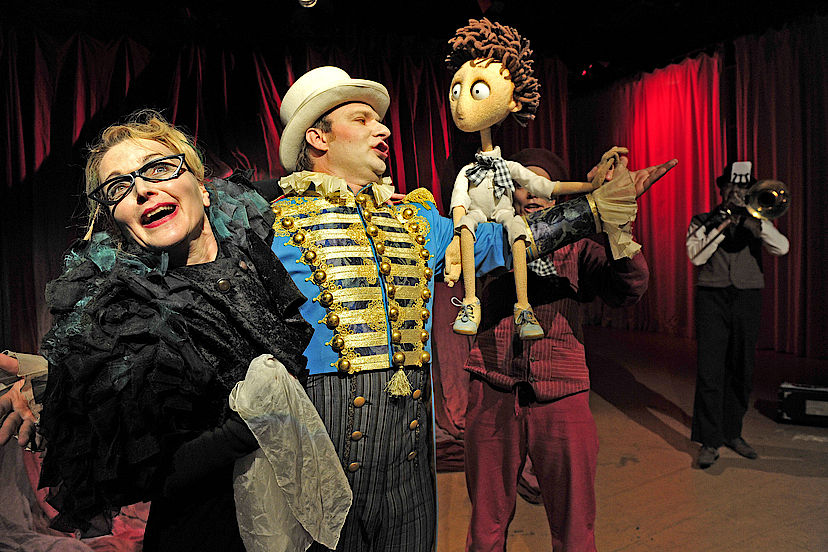