Maschinenhalle #1 is not only a new sort of music theatre, it is a cross-genre art work created by the composer Bernhard Lang, the choreographer Christine Gaigg, the computer musician Winfried Ritsch and the light and stage designer Philippe Harnoncourt. At twelve stations, arranged in series in space and each consisting of an acoustic panel and an automation piano, twelve dancers perform in a feedback situation of movement and self-generating sounds.

A confined space in which machines shape their own world, and where we can observe and analyze but hardly influence. We can hear, see, and feel their systems but never figure them out. We are at their mercy. With Maschinehalle #1, choreographer Christine Gaigg, composer Bernhard Lang, computer-musician and artist Winfried Ritsch, and light and set designer Philipp Harnocourt created a choreographic-musical work removed from musical-theatrical conventions, whose individual elements are joined by invisible threads: performance venue (hall), machines, and people become the meta-machine whose rules specify the sequences.

Twelve dancers in a feedback situation of movement and self-generating tones perform on twelve serially-ordered stations, each consisting of a resonating platform and an automated piano. The music is created indirectly in this way: the dance steps on the resonating platform are translated by the computer, transferred to the keys of the automated piano, and then played back again and reinterpreted with human possibilities. The movements sculpted by sound material change in their repetition: newer rhythms are produced and demand the dancers’ creativity and precision. The twelve units communicate with each other, sometimes in solos or chorally, sometimes synchronized or contrapuntally – but always unpredictable with respect to their sequencing and spatial distribution.

The automated, machine-piano is a singular, technical virtuosity impossible for a human player. The dancers, however – equally virtuoso but yet individual – convert its machine-generated rhythms into complex, wildly thrown or gently suggested movement-adventures, and provide an expressive contrast to the totally identical apparatuses. A beside-and-with-each-other of man and machine, smoothly running and progressive.

Naturally, the incorporated subtext is also political. It tells of the power of the collective, the power of machines. It tells of the dialectics of passion and terror, of coordinated rhythms produced by large masses, of the machinelike quality of repetitions, and the obsessive nature we observe as much in addicts and the psychically ill as in many of today’s work procedures.

Since a few years, Christine Gaigg, Bernhard Lang, Philipp Harnoncourt, and Winfried Ritsch work together – in different combinations personnel-wise – on a loop grammar, which structurally connects music and dance (or movement) in space. Several of these works from the so-called TRIKE series, developed since 2004, depict electronic music and movements on top of one another; others work perfectly without technology, with the performers creating a moving landscape consisting of visual and acoustic rhythms produced without sound feeds. Metal resonating platforms were first used as early as the TRIKE series, in which the electronically-amplified steps of the dancers on the raised platforms become sound material. Other pieces from the series explicitly deal with a technology based on the process of cutting and repeating short sequences, the computer-generated video repetition – the visual loop generator. At the same time, the dialog between the visual projections of dance movements and a real, moving body becomes the centre of attention. The last production of this series for now – also like Maschinenhalle #1(2010) – places the sound projection on a musical instrument in the foreground, with the instrument or the idea of the instrument extended by the Trias resonating platform, piano, and loop generator.

Composer Bernhard Lang began exploring electronic music and computer technology at the Institute for Electronic Music (IEM) at the University of Music and Performing Arts in Graz / Austria. Since 2003, he focuses on dance and develops projects with Xavier Le Roy (“The Theatre of Repetitions”, 2003), Willi Dorner and Christine Gaigg in particular. For the ‘2nd Nature’ label, Gaigg produces contemporary dance projects, often in collaboration with light and set designer Philipp Harnoncourt. Winfried Ritsch is associate professor at the Institute for Electronic Music (IEM) and also heads the “Atelier Algorythmics” studio.

“The starting point of the composition was the instrument Winfried Ritsch developed on the basis of the lengthy artistic collaboration with me and the choreographer Christine Gaigg. It consists of 12 resonating platforms, 12 automated pianos, 12 computers, and 12 performers. Their movements generate tones and rhythms, which – through the feedback processes of sampling and looping – in turn serve as the impulse for new dance-related movements. This concerns a self-generating composition, which more or less invites the composer to retreat into the background as its creator. The piece is a borderline experience between the perpetual tipping of ultra-precise directions and sensual blurring, which it also consciously plays with. Interesting about all this – precisely from the perspective of composition – is that there is no telling whether the movement produces the tone or the tone the movement. Essentially, this makes the composition not only a work of musical theatre but also a piece of aesthetic-philosophical and artistic research.” 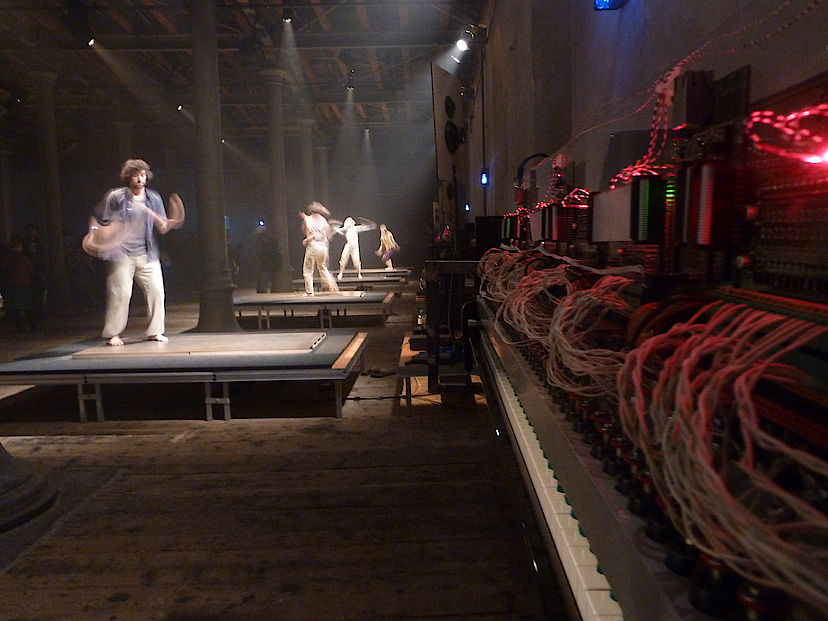 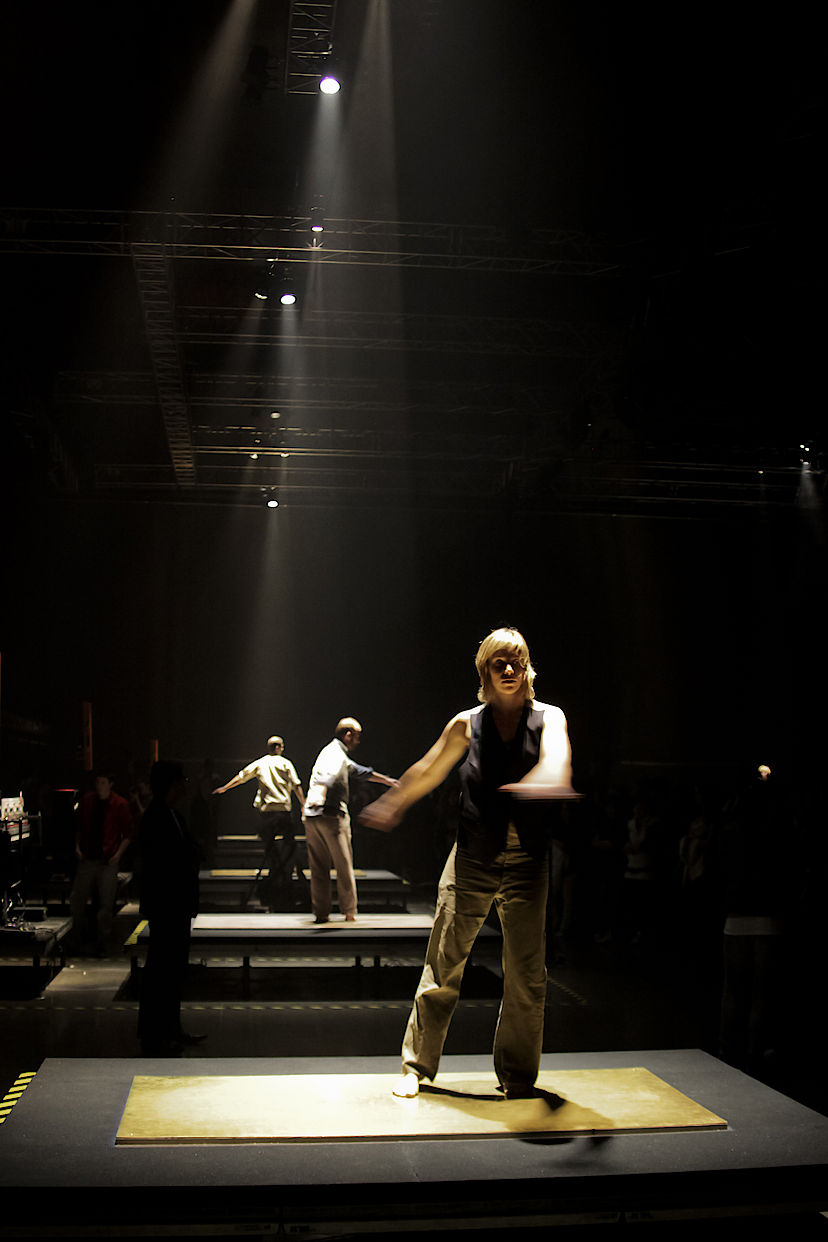 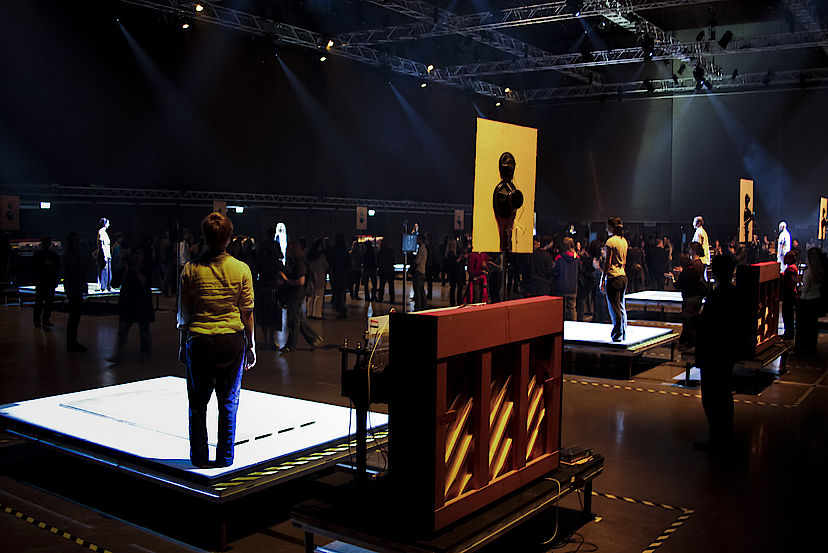