Josefine Sings is a contemporary opera project based on Frank Kafkas last short story “Josephine the Singer, or the Mouse Folk”. It focuses on the question whether the singer Josephine is really able to sing or only able to whistle. The novel deconstructs the romantic conception of the relationship between the artist and the people.
In opera silens’ Josefine Sings production, recitation, acting and music do not evoke an integrated image but remain separated from one another. The performance creates an uncanny and weird atmosphere of disintegration.

Josephine the Singer, or the Mouse Folk (German: Josephine, die Sängerin oder Das Volk der Mäuse) is the last short story written by Franz Kafka. It primarily details a community and its relationship with a renowned singer named Josephine. The story was included in the collection A Hunger Artist (Ein Hungerkünstler) published soon after Kafka's death.

The novel tells the story of Josephine the Singer, a rarity amongst the mouse people for having the innate ability to sing, which no one else in the community has displayed. She can not only sing, but can sing beautifully, helping all the mouse people to tolerate their unusually hard lives. Some of the mouse people claim to dislike her and do not believe she is truly singing, while others adore her and consider her a communal treasure; regardless, all the mouse people gather round to listen to her, and once she is singing, forget their reservations about her.

Throughout the story, the narrator, who at first purports that whoever has not heard Josephine sing does not know the true power of music, begins to doubt his own judgment. He suggests that what is held so dear by the mouse people is not Josephine's 'ability' but the silence that falls over the people and their settlement when she is singing. While he never ostensibly decries or criticises the beloved singer, he gradually whittles away at her character, finally describing her as someone of little talent who dislikes and often shirks her work, and who sometimes brings danger on her people (for her singing can act as a beacon to the many enemies of the mouse people). Still she is considered a gift and adored by the community; yet, when she 'disappears', allegedly because she did not feel her music was appreciated, little sleep is lost over the matter - the lives of the mouse people continue as normal.

It is uncertain if the mouse people actually are mice. Although one of their number who is also the narrator describes them falling ‘quiet as mice’ when Josephine begins to sing.  Aside from the title, this is the only time that mice are referenced.

opera silens was founded in Hamburg in 1997 by director Hans-Joerg Kapp, composer Jochen Neurath, singer Ulrike Bartusch, dancer Wobine Bosch, dramaturg Thorsten Beyer, stage designer Christian Wiehle and costume designer Irène Favre de Lucascaz. As opposed to making use of traditional methods of storytelling by staging a conflict and offering modes of identification to the spectator, opera silens basically separates text, music, image and acting and recombines these elements.  The first two opera silens productions Satie/Amnesie in 1997 and the asynchronous opera Amnesie International (1999) - both of which premiered at Hamburg opera stabile - recombined text and music by composer Erik Satie. Satie/Amnesie was also shown at ArtGenda Festival at Stockholm in 1998.
In 2001, opera silens created two baroque opera productions at Kampnagel Hamburg. The first production, acqua acqua acqua acqua was based on the idea of building a baroque Wunderkammer on the basis of Monteverdi´s Madrigal book VIII Libri amorosi, e guerrieri. Then, in Earth combined a new approach to baroque gestures with music by Purcell and Bach. In both productions opera silens recombined the musical pieces and rearranged them with contemporary instruments and electronics.
In 2005 opera silens cooperated with composer Johannes Harneit by staging Robert Walser´s novel Der Raeuber at opera stabile. In 2006 opera silens commissioned Russian composer Vadim Karassikov to contribute music to the installation- based music theatre production see my songs at Altonaer Museum. This piece explored the visual and acoustic borders of perception. The piece was shown at Festival Rainy Days in Luxembourg in 2008.
In 2008, opera silens premiered gehen gehen gehen. Kein Theater nach Thomas Bernhard in co-operation with Hamburg Theatre Academy and composer Fredrik Schwenk. The piece was invited  to the 2009 BLACK BOX at Munich Gasteig.
At this time music producer Thomas Schmoelz joined opera silens. Focussing on contemporary music, he complements the work of Hans-Jörg Kapp by developing musical concepts.
For the last but one production Neurovisions – eine gesamteuropäische Touretterie (Kampnagel Hamburg, 2010) opera silens collaborated with neurologist Prof. Alexander Münchau and three Tourette’s patients. Neurovisions combined songs from the Eurovision Song Contest with music by composer Charlotte Seither.
opera silens is currently developing a new music theatre piece in co-operation with Kampnagel Hamburg.

In his final piece of prose, “Josefine, die Sängerin oder Das Volk der Mäuse”, Franz Kafka does not tell us the wording of the arias sung by the mouse Josephine in front of an enchanted audience, who are caught up in the extraordinary beauty of her voice. When I was asked to provide some music for the opera silens production “Josefine singt”, I imagined these to have been the sibylline words of the fragmented song “Viel hab ich dein”, which Friedrich Hölderlin notated in the “Homburger Folioheft”, the sketch book that accompanied him through a catastrophic watershed in his life. In my music, Josephine’s voice is represented by the sounds of a cello playing natural harmonics in the highest register. Thus we do not hear the words of the song, even though they are precisely encoded in the virtuoso performance of Agnieszka Dziubak’s left fingertips and in the emphatic movements of the cellist’s right arm controlling the bow and her hand articulating the melody. I asked the production team to use my score freely, cutting it up into 42 phrases that are distributed throughout the entire play.
(Wolfgang von Schweinitz) 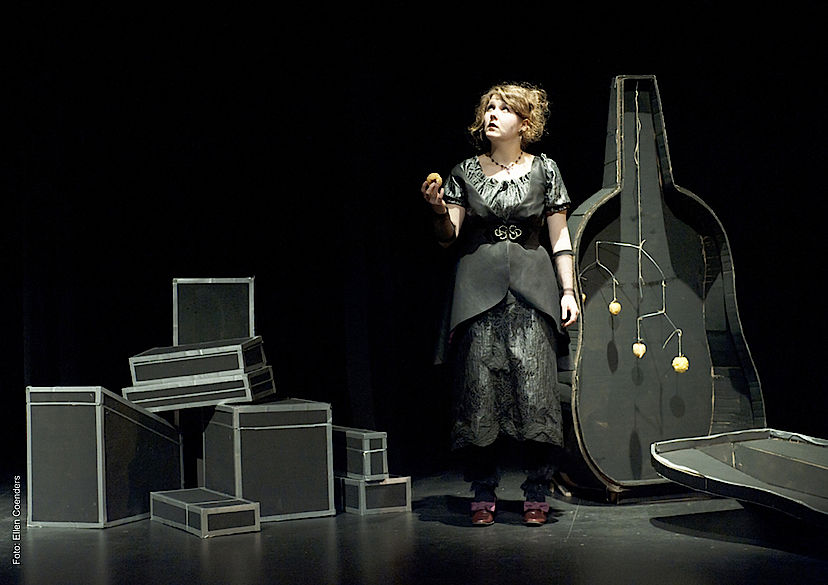 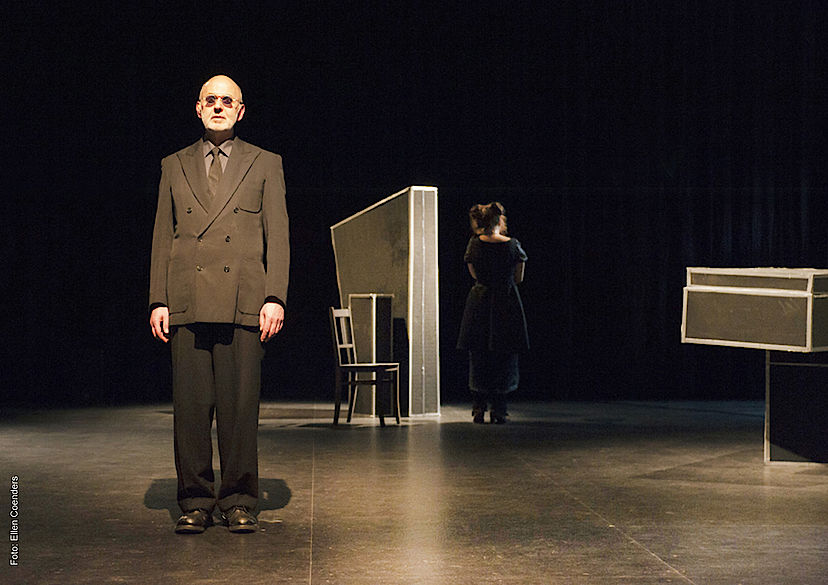