The sound world of this work is inspired by the notion of the found object. Objects of daily life that have been chosen for their sonic and expressive qualities. These objects (car horns, bicycle, glass lanterns, hoses, megaphones ...) act on the one hand, as acoustic detonators of harmonic rhthym, melody, as well as spectral and  spatial impulses for the musical score. In relation to the literary,  this work also addresses the concept of logic of  Kafkaesque nightmares, in an atmosphere of uncertainty, in which the characters are torn between reality and fantasy.

About the Great Oklahoma Theatre

Based on the final chapter of Franz Kafka’s novel Amerika, the opera is set over five scenes during which a group of people, including the central character Karl Rossmann, try to overcome  numerous impediments to join the Great Oklahoma Theatre, a strange organisation willing to recruit people who wish to "belong" to it. Kafka never finished the chapter, so we offer our own interpretation of the story based on the logic of Kafkaesque nightmares: the characters are torn between reality and dreams in an atmosphere of constant uncertainty.
Although in our version of the story those who are taken on achieve their aim, the opera recreates the cyclical nature of nightmares in which something starts and ends with the same sense of ambiguity. In this respect the opera uses the essential narrative character of the novel, albeit offering a more psychological account of the course of events. By emphasising certain passages of the text, we expose the emotional profile of the characters using a mixed time frame, which combines the concept of the instant with the intrinsically dynamic, inevitable and cyclical nature of dreams.
Using an analysis of the text, we sought to establish a common language between the literary ideas, audio concept and staging, with the aim of ​​strengthening the link between what the audience sees and what it hears. This connection is not necessarily depicted in an iconographic or figurative sense, but through the construction of symbolic parallelisms in which one of the elements – literary, visual or audio – helps us to create the atmosphere for certain specific parts or for the piece as a whole. Thus, we based this connection on a combination of text and sound to see the repercussions it would have on the performance. However, during the course of the compositional process we reversed the order of the elements to suit the specific needs of the performance.
Both the characteristics of the venue and those of the instrumental and vocal ensembles had a decisive influence on the compositional strategies adopted in terms of sound and space. They also affected the interpretation of the text, as roles and characters were redefined in accordance with the specific possibilities of the vocal ensemble. Thus, some of the spaces featured in Kafka’s work were adapted to the specific atmosphere of the venue where the piece was staged.
(by Marcos Franciosi, composer)

In Argentina there are two important centres for experimentation: the CETC and the TACEC (in the Teatro Colón and Teatro Argentino respectively). Both were conceived as spaces that could be used to produce, promote and increase awareness of experimental contemporary art. Even though economic subsidies for productions are never sufficient, the two spaces offer artists the kind of infrastructure which is to be found in proper theatres, such as a stage, sound, lighting, set design, etc. Most composers, myself included, are more than willing to participate because these essentials are provided. Even so, not all Argentinean composers opt to base their work on experimentation.
In the case of the Great Oklahoma Theatre, I decided to adopt this approach because in terms of art theory, I have always been interested in a perspective rooted to some extent in Duchamp’s principles. The choice of objects used in the piece interacts with writing techniques that are part of what we understand as musical tradition. Notwithstanding its experimental nature, and the fact that the piece is also inspired by certain characteristics of the space itself, it is a traditionally-written composition completely based on a musical score, and could therefore also be staged in other venues.
As for the TACEC, it is an additional space at the Teatro Argentino de la Plata constructed from an area in the basement of the Sala Mayor Alberto Ginastera, where the goods lifts for the main venue are still situated. The TACEC is now a proper venue, but in 2010 using it to stage a production implied the concept of ‘intervention’ in an unconventional space. Its appearance, including its lighting and its smell, were more typical of an engine room than a conventional theatre, and these aspects were used to maximum advantage in the staging of the piece.
The Nonsense Ensemble Vocal de Solistas, which was established in 2009, is unique in Latin America and is dedicated to a modern vocal repertoire for solo artists. It comprises eight vocalists including its director, Valeria Martinelli, who directed The Grand Oklahoma Theatre. This was the first opera the ensemble ever performed. Seven of their members wrote the piece, basing it on the group’s specific characteristics.

In terms of the musical composition, our work was based on four main elements:
Vocal treatment of the literary text.
Use of day-to-day objects as instruments to produce sound effects.
Extensive and conventional use of normal musical instruments.
Process of sound in real and delayed time.
The various formal and textural configurations are based on the association of sounds with the specific sources which generate them. As such, objects such as car or bicycle horns, glass goblets, corrugated hoses, megaphones, etc, represent a specific sensory material reality: the sound of air, glass, metal, water, wood, etc. Thanks to the cognitive identification of these elements, listening becomes a symbolic exercise in which the sound itself describes a ‘specific state’ which is directly or indirectly associated with the drama, thereby enhancing the various semantic elements of the text. 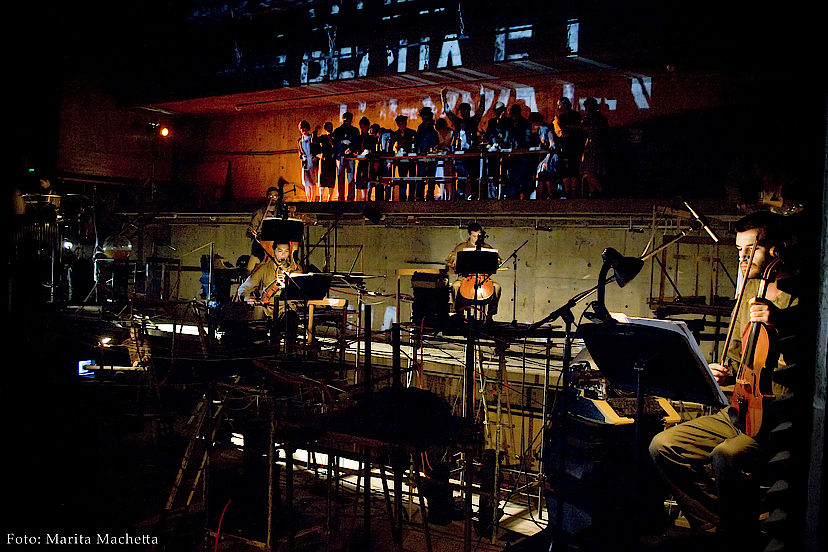 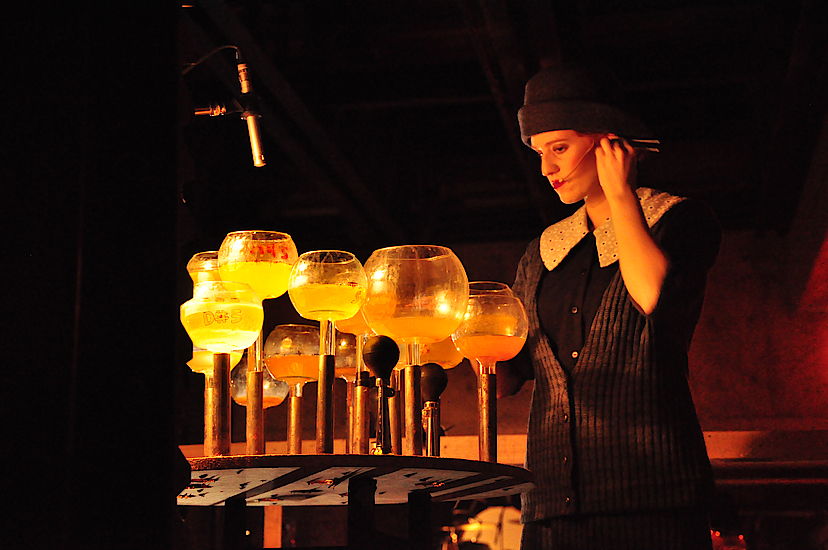 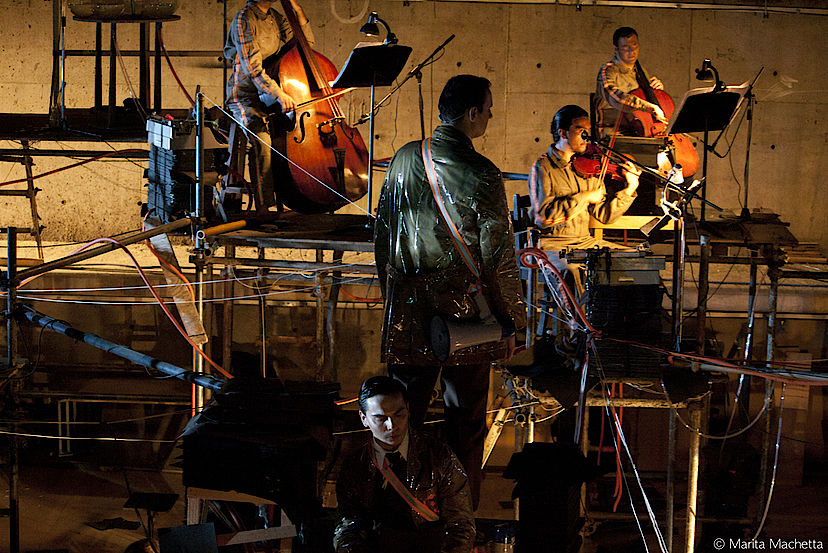