Shifting Ground has been has been assisted by the Australian Government through the Australia Council, its arts funding and advisory body; supported through Creative Victoria and developed through Arts House CultureLAB.

Shifting Ground is a performance and installation exploring geological time, scale and morphologies. Artist, Zoe Scoglio unites object manipulation, physicalised sound, voice and interactive projection mapping in a ceremonial journey that reveals the presence of the earth’s minerals in the structures we create, the tools we use, and the bodies in which we live. Shifting Ground is a reminder of the impermanent and fleeting nature of our time on this earth, and our symbiotic relationship with the elements that form it.

Shifting Ground is a performance and installation that explores geological time, scale, and morphologies. Artist and performer Zoe Scoglio unites object manipulation, physicalised sound, voice, and interactive projection mapping in a ceremonial journey that reveals the presence of the earth’s minerals in the structures we create, the tools we use, and the bodies we inhabit. Made for this era of the Anthropocene, Shifting Ground is a reminder of the impermanent and fleeting nature of our time on this earth, and our symbiotic relationship with the elements that form it.

Created as a site responsive work, Shifting Ground is intended to adapt to the environment of its presentation, be it a gallery, industrial building, domestic space, cave or theatre. Remnants of a living room, a construction site and an archaeological site litter the space like an archipelago of debris orbiting around a central, low coffee table. Upon entering the space, the audience is invited to select a rock and place it on the coffee table before finding their place in a semi-circle of seating within the installation. After this initial ceremonial encounter, the rocks become the instruments, the subjects, and the audience representatives as they are moved by a gestural choreography across the table’s surface.

The apparent simplicity of Shifting Ground conceals a complex technical infrastructure. A sophisticated custom software system enables the automated sequencing of sound, light and interactive projection mapping onto the tracked objects and the human body in real time. From an image of a large, fast-approaching meteorite to a tiny spot of light that reveals a mere pebble, video projection is used to illuminate, activate and transform the objects, architecture and lone performer within the space.

is an artist who uses performance, video, sound and installation to create interdisciplinary, site-responsive and participatory work. Her live projects explore possibilities for collective engagement, ceremonial encounters and enlivened installations while drawing upon her training in media arts, voice and body-centric practice. In response to this era of the Anthropocene, Zoe creates work that focuses on the ways our human lives and physical forms are intrinsically interconnected with the geological world we inhabit. She is interested in how the narratives we create about our idea of humanness impact the way we commodify, consume and value the natural world and its resources.

Zoe also works as a video designer and videographer for dance, theatre and opera. Her award winning performance Shifting Ground (Arts House, Melbourne 2012) has toured to Tramway (Glasgow) and Apiary Studios (London) in 2014.

is a sound artist working across performance, design, installation, and recording. He approaches sound through delving into the unknown, whether in the form of an unstable instrument, an unfamiliar environment, or an improvised encounter. He has performed extensively in Europe, Asia and Australia.

With reference to an understanding that all matter exists as vibration, Shifting Ground explores the ways sound can manipulate physical form in a dynamic live environment. All objects and materials encountered can be activated through their ability to create and emit sound, or be mobilised by sonic vibrations. Contact microphones and speakers embedded into the coffee table allow for live manipulation and amplification of the sounds made by the rocks as they are moved on the surface of the table. The table later becomes a resonant body itself as embedded transducers turn its surface into a giant speaker that visualises the live vocal feed by physically vibrating and shifting salt into detailed cymatic patterns. The sound for Shifting Ground is as much a visual and spatial score as a musical composition with the felt, the seen and the intuited being as important as the heard.

In a performance void of spoken language, the voice plays a small but vital role connecting the human body with geological bodies, an expression of the corporeal human experience within the immensity of geological time and scale. Echolocation calls and pre-verbal tonal incantations evolve to become a monumental chorus connecting the personal and internal with the interplanetary.

“Shifting Ground may not only be the most intimate, but perhaps also the most powerful project in this year’s Music Theatre Now selection. Zoe Scoglio has created a magical universe with limited elements like gravel, stones and pebbles, while the audience sits close to the intriguing action. Scoglio’s message is clear: even if we are mortal, the world keeps turning and evolving. Yet the question remains: how do we relate to our environment? Within a very poetic context, Scoglio raises contemporary issues. The jury was blown away by this intimate portrait.” – MTN Jury 2015 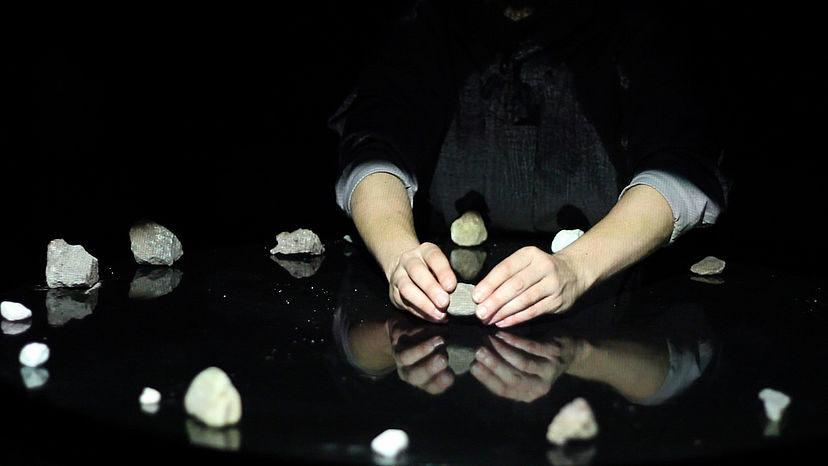 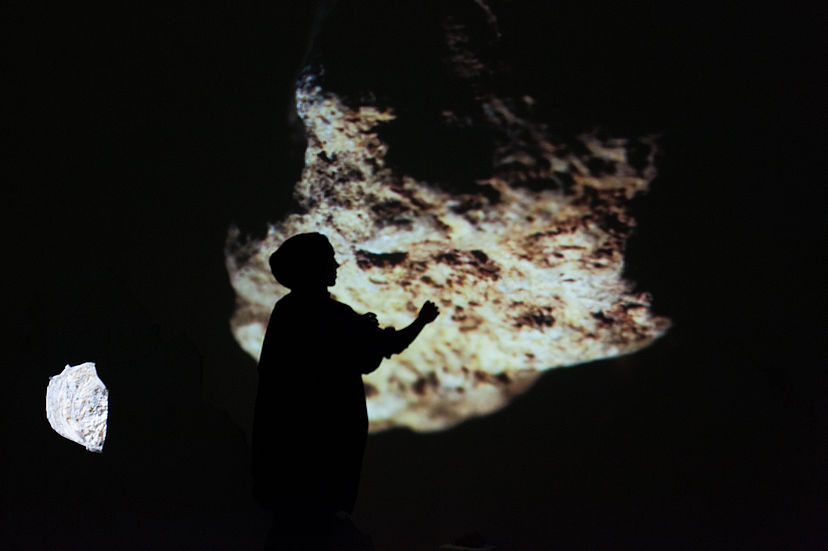 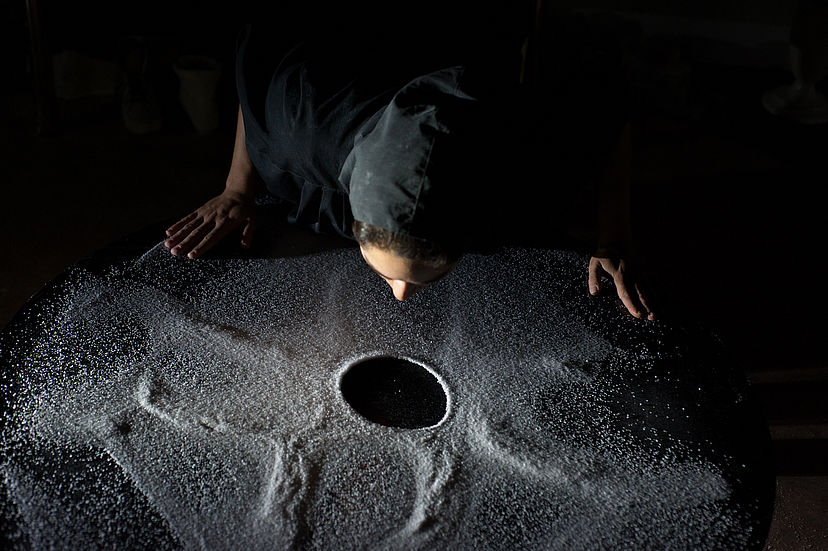 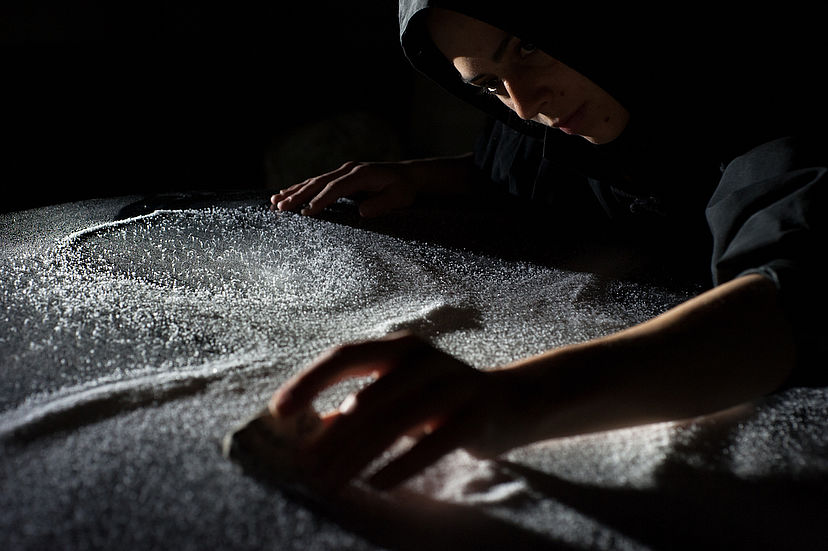