The opera "Two Acts" was written and staged by Vladimir Rannev to a libretto by Dmitri A. Prigov. It was commissioned by the Goethe-Institut (Germany) and the State Hermitage Museum (Russia).

Hamlet and Faust are two types of reflective consciousness, rooted in European culture. But in this opera their "reflectivity" is not so intense as in the original sources, but like on the last turn of the fading inertia. We are not dealing with characters and personalities, but with mediocre philistines, even marginals, whose activity today is inappropriate and even ridiculous. Their sad fate is so, that the current rules of life do not give them reasons to play their mission. These rules of today's real life do not discord with the pathos of their "lofty thoughts", but comfortably insert this pathos in itself like a ritual or non-burdensome habit. Today they are only noise of language, nothing more.

Two Acts is a collaboration between the Goethe-Institut and Hermitage Museum in St. Petersburg commissioned for the German Year in Russia 2012 program. The premiere doubled as the opening of the Great Atrium at the Hermitage Museum following a lengthy reconstruction.

The libretto was written by the prominent Russian author Dmitry A. Prigov (1940-2007), the leader of the so called Moscow Conceptualist School of the 1970s and 1980s. As often is the case in Prigov’s work, mythic figures of Western culture appear as protagonists. In Two Acts, we find both Hamlet and Faust. Prigov acknowledges them as two types of reflexive consciousness, deeply rooted in European culture, though not to be mistaken for heroes. Their reflections are awkward and out of place. The sad truth is that contemporaneity sets a framework, which does not allow these characters to live up to their destinies. The rules of life are not in disaccord with the pathos of “lofty thoughts”, but in fact are fully compatible with this pathos as the prop of a certain behavioral routine, an unobtrusive habit. Today these rules are the rustling whisper of language. Nothing more....

was a Russian writer, artist, and founding member of the Moscow Conceptualism School in art and literature. In the Soviet Union, no official publication of Prigovs’ texts or exhibitions of his works took place. Starting in 1989, his literary and artistic activities emerged from the underground subculture. He lectured regularly at universities in Europe, the USA, and Japan. In 1995, the Ludwig Museum in Cologne held Prigov’s first major solo exhibition. Since then, Prigov’s art has been regularly included in gallery and music exhibitions. Prigov’s texts have also been translated into multiple foreign languages.

is a composer and a lecturer at the St. Petersburg State Rimsky-Korsakov Conservatory and the St. Petersburg State University. In 2003 he graduated  from the composition department of the St. Petersburg Conservatory. In 2003-2005 he studied electronic music at the Hochschule für Musik in Cologne. Rannev is the winner of the Salvatore Martirano Award at the University of Illinois (USA, 2009), and the Gianni Bergamo Classic Music Award (Switzerland, 2010). His opera Two Acts won the Sergey Kouryohin Prize Grand-Prix in 2013. Rannev’s music has been performed by various ensembles including: the Russian State Academic Symphony Orchestra, eNsemble of the Pro Arte Institute, Studio of  New Music, Moscow Contemporary Music Ensemble (Russia), Orkest de Volharding, Amstel Quartet (The Netherlands), Ensembles Mosaik, Les Eclats du Son, Integrales, LUX:NM, Clair-obscur, El perro Andaluz, and the choirs Singakademie Oberhausen and Cuntus Domus in Germany, and Ums’Jip, KontraTrio, Ensemble Phönix Basel, Ensemble Proton Bern in Switzerland. Rannev is a member of the StRes (Structure Resistance) group of composers in Russia.

was founded in 1997 upon the initiative of young musicians in Berlin, and quickly gained recognition in Germany and abroad. Ensemble Mosaik has held over 150 premiere performances with many works composed especially for it. Ensemble Mosaik searches for new forms of concert and stage presentation of contemporary classic music. The ensemble has performed in the most important European and international contemporary music festivals: Donaueschinger Musiktage, Wien Modern, Huddersfield Contemporary Music Festival, Warsaw Autumn, the Berlin festivals Ultraschall and Maerzmusik, Klangwerkstatt, Kunstfest Weimar, Musik der Jahrhunderte in Stuttgart, Musica viva in Munich, ULTIMA in Oslo, Time of Music in Viitasaari, and Dialogen Salzburg, among others. Ensemble Mosaik is the winner of the Ernst von Siemens Foundation, Boris Blacher and Busoni Prizes. Ensemble Mosaik repeatedly performs for radio. The ensemble’s CDs appear on Schott Studios, Col Legno, Kairos, Wergo, Nmc recordings and Edition rz.

is a composer and conductor born in 1969 in Hemer (Sauerland). He studied at the Berlin University of Arts (prof. Friedrich Goldmann and Gösta Neuwirth). Since 1998, he has served as  the conductor of Ensemble Mosaik. In 2002-2004 he taught at Hanns Eisler Conservatory in Berlin. His works are regularly performed at major festivals of contemporary music with ensembles including Klangforum Wien, Ensemble Modern, and orchestras such as Jungen Deutschen Philharmonie, Westdeutsche Rundfunk, Süddeutsche Rundfunk, and the Bayerische Rundfunk. As a composer, Poppe was awarded the following prizes and scholarships: the Boris-Blacher-Preis (1998), Kompositionspreis der Stadt Stuttgart (2000), Busoni-Kompositionspreis der Akademie der Künste Berlin (2002), Akademie Schloss Solitude (2002/03), Ernst von Siemens Musikpreis (2004), Schneider-Schott-Musikpreis Mainz (2005), Stipendium der Villa Sepentara (2006). Since 2008 has been a member of the German Academy of Arts.

“‘Awesome’ is the best word to describe this opera by Vladimir Rannev and librettist Dmitry Prigov. It was premiered in the Hermitage Museum in November 2012, won the Grand-Prix of Sergey Kouryohin Prize 2013, and was nominated by the 2014 National Theatre Golden Mask Prix for "Best Work Composed for Musical Theatre".

Two Acts relates to two protagonists, Hamlet and Faust, who represent two types of consciousness rooted in European culture, yet which reveal themselves to be awkward and out of place in our own time. The music is appalling, complex, and straightforward. It is a very sophisticated combination of minimalistic elements and avant-garde proposals. The most important thing, however, is that ever since we first listened to the music, we have been hooked on it. It is relentless. It keeps you wanting to listen more and more until the end. The same thing happens in the mise-en-scène, which flawlessly combines the use of projections with a more conventional staging.

Two Acts has no linear story. It is instead a reflection on these two characters. Both characters seem to merge together, creating a sort of “Hamleaust and Fausamlet”. Although their texts are taken from their real literary prototypes, they talk to each other in both acts.

The jury selected this work because of its originality, both in the concept and the staged result. All of the elements are perfectly resolved, and the show is interesting, fascinating and wonderful to hear and to see. Pure magic!“—MTN Jury 2015 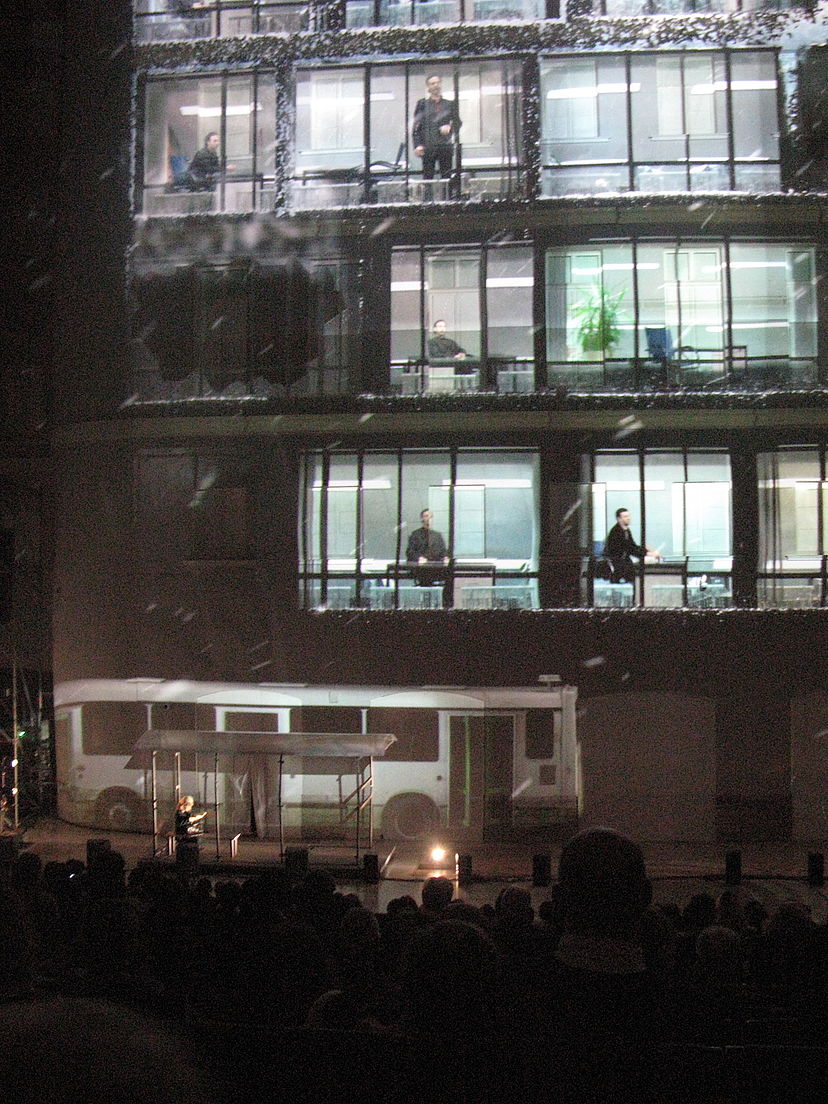 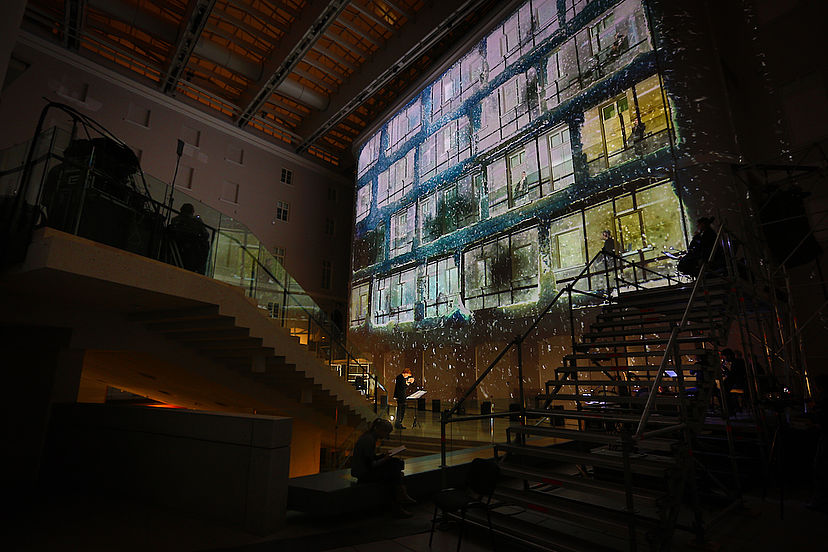 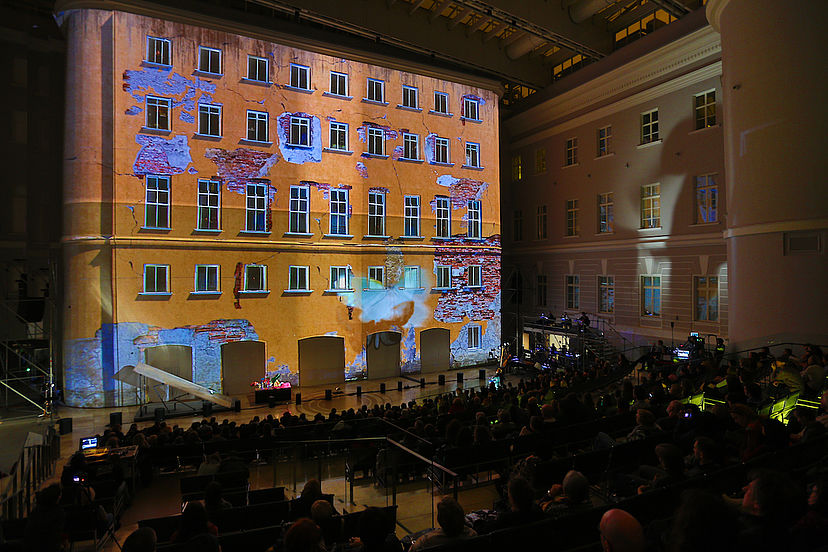 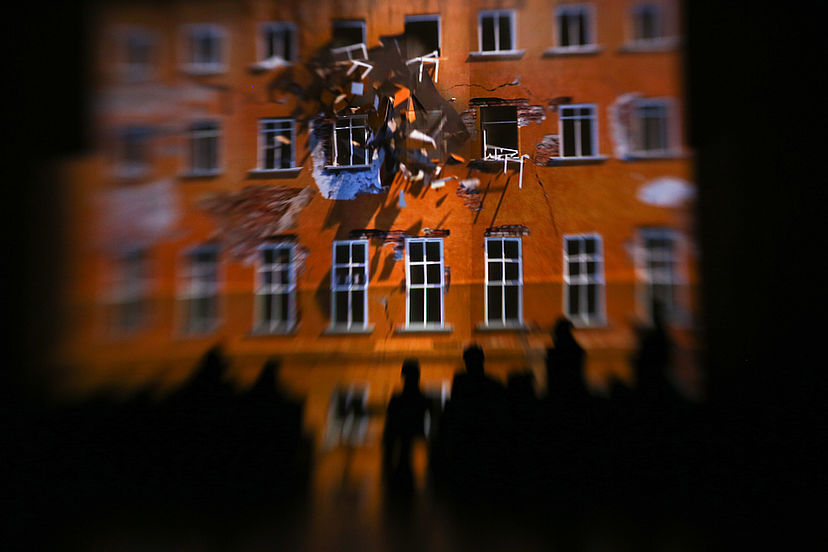