After having created and successfully shown a number of multimedia projects the 33 1/3 Collective was invited by the Voi-Z Festival Zwolle, the Netherlands, to produce a version of the Bartok’s opera Bluebeard’s Castle.
In the Collective’s Bluebeard, a version of this well known opera, the basics of the classical theatrical setup are shifted. For instance, Bluebeard’s male protagonist is not illustrated by a performing actor, but turned into a circumstance. Judith, the female protagonist, leads the audience by the seven doorways and makes it feel what is happening behind the doors. As a result the audience feels as if they are inside the chambers, witnessing and undergoing Judith’s destiny.

The classic tale of Le Barbe Blue - Bluebeard - tells the story of a violent nobleman in the habit of murdering his wives, and the attempts of one wife to avoid the fate of her predecessors. At the beginning of the 20th century, the period in which Sigmund Freund developed and deployed his theories, it was said that the castle dwelling, which plays such an important role in the Bartók opera, mirrors the workings of the Duke’s (and therefore man’s) psyche, and that the drive of the female protagonist to enter its rooms (whatever the outcome) represents women’s desire to understand (hopefully to her advantage) that psyche. In our Bluebeard, the fate of this female is depicted not by an actress, but by a virtual representation of an actress. Bluebeard’s male protagonist also becomes a virtual entity. The spectator witnesses the emotional quest of the wretched female creature. She leads us through Bluebeard’s dwellings in such a manner that we feel as if we are part of the plot: experiencing her fear and disgust and undergoing her inescapable destiny; an experience that is introduced by an enigmatic prologue and enhanced by a series of musical improvisations, soundscapes and lyrics. Through this approach, virtual, multilayered, mysterious and constantly changing spaces are visualised and projected onto the floor as well as onto the geometrical environment of a large (sometimes pivoting) cube.

Bluebeard – What does it mean?

Is Bluebeard an opera – and if it is not opera, then what is it? In fact, we too find it difficult to determine what exactly our Bluebeard is. All we know (and have learned from our audiences and the various press reviews) is that we have developed a kind of narrative which does not yet have a name.  By nature we (the Collective) jump out of all boxes, even our own. We do not fit the templates of Music Theater Praxis: the development phases: composer writes music, librettist constructs text, dramaturg applies drama, musicians rehearse, director directs etc. We aim to do things differently, experiment, find new ways of developing a combined musical and visual language.  The New York Times Magazine even opined: “Video has infiltrated mainstream opera houses, too, but in Bluebeard, three young artists with a white box have unstopped a stream of 3-D illusions that the Metropolitan Opera should really be coveting[…] It’s left a message blinking on Big Opera’s screen: CAN YOU DO THIS?”

We are Jules van Hulst, Douwe Dijkstra and Coen Huisman, three individual artists working together to produce a 100% result. As Collective we create images, atmospheres and theatrical scenes primarily using projections as well as improvised and composed music to tell a story. Our approach is to visualise virtual, multilayered and mysterious spaces that change constantly. Through the use of projectors we create disorientating differences in visual perspectives and distances.
During our time as students at ArtEZ we collaborated on a range of projects, including The Falls, an experimental opera based on one of Peter Greenaway's earliest works. Greenaway himself was closely involved in this production, for which we created the visual input.

Bluebeard - Or how to perform an opera without the usual suspects

Michael de Roo invited us to create a contemporary version of Duke Bluebeards Castle, Bartok’s infamous opera, based on Le Barbe Blue, a French literary folktale, the most famous version remaining was written by Charles Perrault and first published by Barbin in Paris in January 1697. Many a writer and composer has been inspired by this gruesome tale of the ugly Duke killing his many wives, not least Béla Bartók and Béla Balázs, his librettist.
It was our dearest wish to use both the soundscapes created by Michael de Roo and excerpts of the wonderful 1966 Decca recording of Bartóks Bluebeard’s Castle, where Judith’s part is sung by Christa Ludwig and the Duke’s by her husband Walter Berry. We engaged an agent to inform the Bartok estate of our intentions and obtain the copyright, which, unfortunately, was not granted. As the premiere was only a couple of weeks away we found ourselves in quite a predicament. How to première a (video)opera without the usual suspects or the music? That was the question we had to solve. And solve it we did. It took us three days with the wonderful input of many of our musical friends to create a score, prologue and lyrics - and another two days to synchronise the new material with the existing imagery. Our Bluebeard was ready to go!

The inspiration for the cube came to us after we determined that its six sides could symbolise the dwellings in which the female protagonist executes her quest. There was one problem though: according to the laws of nature, a cube has only six sides. We, stubbornly, wanted to symbolise not six but seven rooms. We solved the problem by breaking the rule. We mounted an electric motor in the cube’s base, which enabled the cube to pivot and spin, the spinning cube representing room number seven. 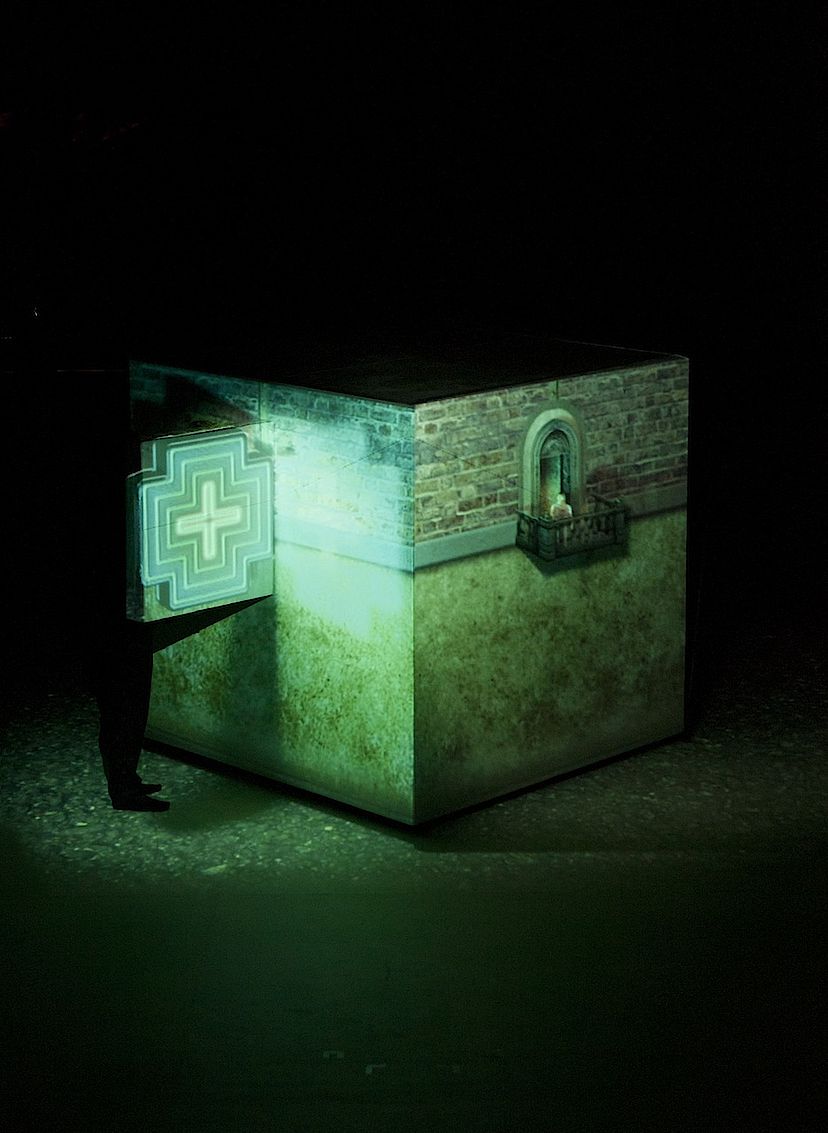 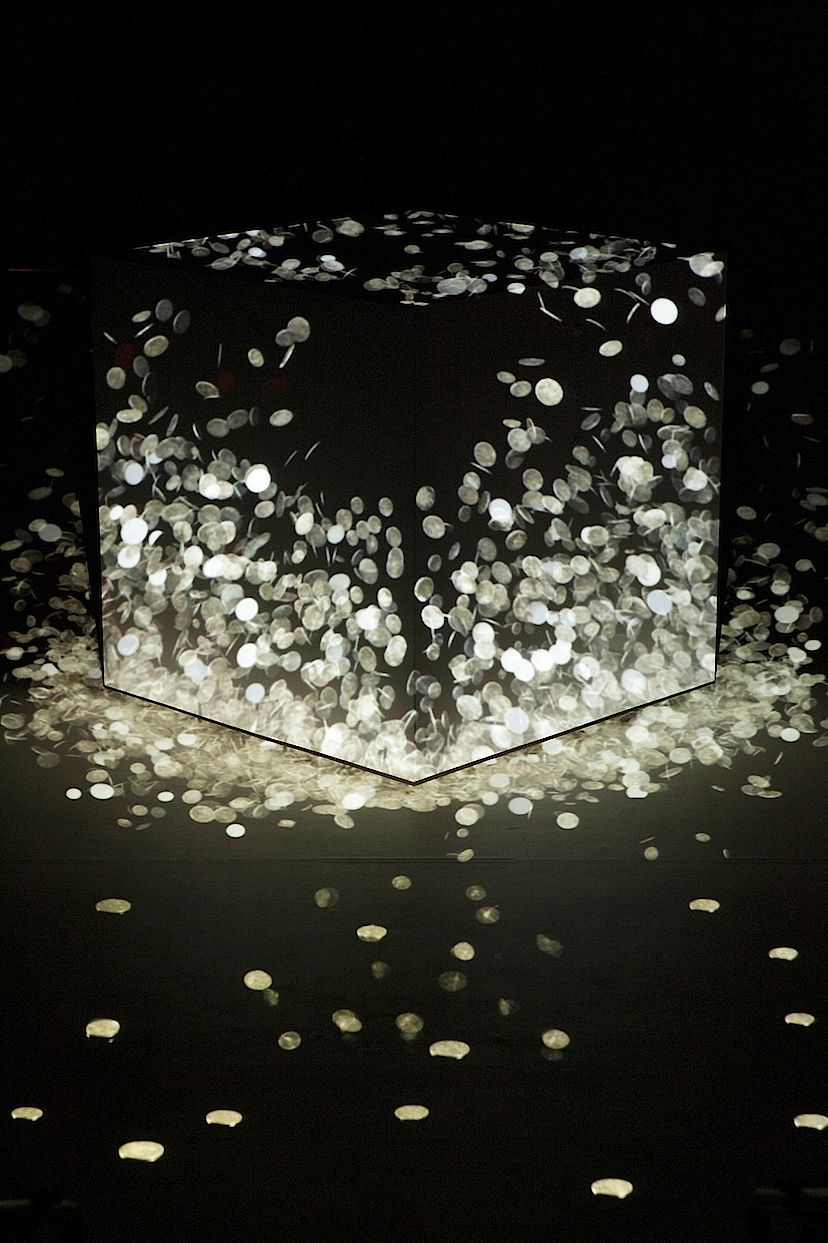